Treat the root causes of a broken farming system, not the symptoms • Farms Not Factories

A newly proposed amendment to the Trade Bill could mean there is no requirement for the Secretary of State, nor the advisory Trade and Agriculture Commission (TAC) to consider the extent to which trade deals affect human life or health through pesticide residues in food, excessive use of antibiotics in factory farming, or pathogens on meat products.

“The British public have said time and again that trade must not be allowed to compromise food standards, yet the Government is ignoring them. By this amendment, the Government is committing, by law, to considering the impact of future trade deals on the health of animals and plants, yet they are specifically ruling out protecting human health. People and public health are just as important as pigs and plants.” – Kath Dalmeny, Chief Executive, Sustain.

“It is appalling that this government will not allow the TAC to report on public health implications of trade deals. We will be unknowingly importing carcinogenic additives, hormones and overuse of antibiotics back into the British diet. This will detrimentally affect everyone’s health and the NHS. This will raise multiple issues, first and foremost we will see a rise in food-borne diseases, long term we’re looking at a rise in cases of cancer, obesity and antibiotic resistance. All costs and deaths which can be avoided through proper trade scrutiny.” – Gabby Morse – NHS Dietician

Due to the TAC’s make-up of corporate-friendly board members, there’s very good reason to be concerned about their ability to safeguard human health when monitoring post-Brexit laws.

Already, the National Farmers Union (NFU), which is well represented on the TAC, has been exposed for promoting a campaign asking members to lobby the government to deregulate neonicotinoids. Because of the potential outrage, the NFU specifically asked members not to share the campaign on social media. Currently this pesticide, which has been shown to be devastating to bird and bee populations, is banned under EU law. If the NFU has their way, this pesticide could once again be commonplace in UK fields which raises serious concerns about the TAC and its members’ anti-environmental, anti-biodiversity agenda. Neonicotinoids have been shown to be harmful to humans – especially foetuses and young children’s brain development.

When our health is sacrificed on the altar of post Brexit trade deals, it isn’t surprising that our health is also ignored in the way authorities address animal husbandry. In November, NOAH (National Office for Animal Health) published their vision for animal health and welfare in the UK. In the supporting documents for this ‘vision’ they focus on the eradication of animal diseases through medication and vaccination rather than looking at the root cause of animals’ compromised immune systems due to horrifically cruel and unhealthy conditions in animal factories. The result of heavily relying on medication to treat symptoms of sick animals is sick people.

NOAH urgently needs to enforce the largely ignored EU law on pig welfare that says routine tail docking must not be carried out, and that tail biting caused by overcrowding, boredom and stress must be addressed by reducing stocking densities and providing a manipulable material like straw to allow the pigs to exhibit natural behaviours such as rooting and nesting. Pigs that live healthy lives outdoors, or indoors with adequate space and straw, are less prone to infections and diseases than animals reared in indoor, intensive factory farms.

Millions of free-range and organic hens and other birds will have to be kept indoors from 14th December, in a national government crackdown to try to limit the spread of a virulent strain of avian flu across Great Britain. The outdoor bird lockdown is in the name of protecting birds from the disease carried by wild birds even though the disease has not been found in any free-range laying flocks. In reality it is to stem the outbreaks on commercial farms, where tens of thousands of birds have caught avian flu and had to be slaughtered. These birds are raised in overcrowded bird factories and fed to grow at such a speed that their compromised immune systems make them susceptible to diseases that enter the sheds via rodents, insects etc. I fear the day is near when, in the name of preventing the spread of African Swine Fever, all our outdoor pigs will be similarly bought into indoor systems to protect the immuno-compromised factory farmed pigs.

Unless we get animal welfare equivalence into law, competing farms will continue in the race to the bottom in terms of standards, not least in animal husbandry. Though retailers could collectively raise standards, it presently takes undercover animal activists exposing deplorable conditions to shame retailers to act. Horrific undercover footage published on 3 December shows pig cannibalism and more than 20 pharmaceutical products, including Colistin, a “last resort” antibiotic widely used in the pig industry, often to prevent or treat diarrhoea caused by piglets being weaned too early. The Nestlé brand frankfurter, made with meat from the farm featured in the undercover video, is sold in most major UK supermarkets. Waitrose subsequently pulled the product from their shelves. These mega companies are still eligible for payments under the Common Agricultural Policy and Herta, the company that owns the farm, received £135,000 in EU funding through the Common Agricultural Policy in 2018 and 2019.

Along with refusing to buy meat from animal factories, we can help prevent the building of ever more UK pig factories by objecting to their obtaining planning permission; like the one near Doncaster where 997 pigs would be doomed to live out their lives in close confinement, with less than 1 square metre allocated to each pig. Please sign this petition and support the concerned local community. Instead of investing into a hated giant pig factory, perhaps this farmer would like to follow Sustain’s advice in finding some public and private finance to support his transition to a whole farm agroecology system.

We can try to prevent planning permission for UK animal factories, but unless we refuse to buy any factory farmed pork, cheap imports will continue to flood in from abroad. Considering all the trade deals the UK are rushing to sign, we could soon be importing pork from China! Muyuan Foods has plans to raise more pigs on a single site than anywhere else in the world; it will eventually house 84,000 sows and their offspring and aims to produce around 2.1 million pigs a year. Muyuan Foods claims that pork prices have soared due to the global African Swine Fever (ASF) epidemic that has caused the death of 40% of China’s pigs, and this has incentivised their new build. “We have hit a very favourable period for development. Pig prices are very high, our profits are really good, and cash flow is really ample”. 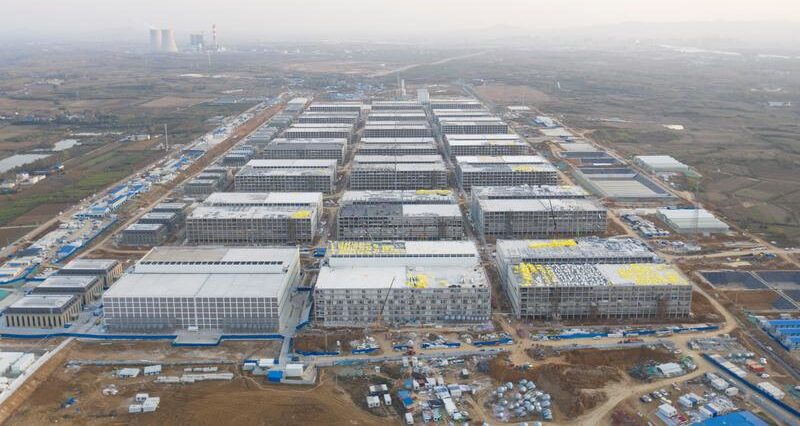 To deal with the potentially vast numbers of sick pigs, the Chinese system uses pig Face Recognition Technology (FRT) which the animal factory operators claim has ‘slashed costs, cut down on breeding time, and improved welfare outcomes for the pigs themselves’. Though high-tech might be useful to find and treat diseases in a system that intrinsically makes pigs sick, we must remember that animals raised outside on small scale holdings rarely need medication. However, as the Guardian article explains; ‘If these developments prove to be too expensive for small-scale farmers, it will probably further concentrate agricultural capital in the hands of just a few. In the 1980s and 90s, around 80% of pork made its way onto Chinese plates from small backyard farms – by 2018, that balance had flipped, with 80% coming from farms with 500 or more animals.”

🔻 Race to the bottom

In this excellent comic strip and video, the UK food group GRAIN describes factory farming as the proverbial race to the bottom in terms of human and animal health, air and water pollution from contaminated waste, destruction of rural jobs, money syphoned out of the local economy and greenhouse gas emissions from construction and running high tech machinery. If more people bought high welfare meat from local small scale farms they may pay a higher price at the till, but they could cover the cost by eating less meat. For some, this would help avoid obesity related illnesses like diabetes, heart disease and some forms of cancer while also helping protect pigs, people and the planet.

🥪 Subway; leading the way in sub-standards

When authorities facilitate the culture of cheap food, fast food chains like Subway will be able to win customers with their Christmas offer of a 6ft long ‘pigs in blankets’ sub. The price of this 6ft sandwich may be tempting but we want to remind you of Subway’s lack of commitment to sourcing high welfare pork. They scored zero in our survey of pig welfare standards followed by high street chains. They also won the Corporate Cruelty Award in October 2019 for their lack of commitments to chicken welfare. Meat may be cheap at the point of sale but it has hidden costs. If we want to have a healthy planet for this and future generations, we must learn about these costs and use the power of our purse to close animal factories. Don’t buy cruelty this Christmas. 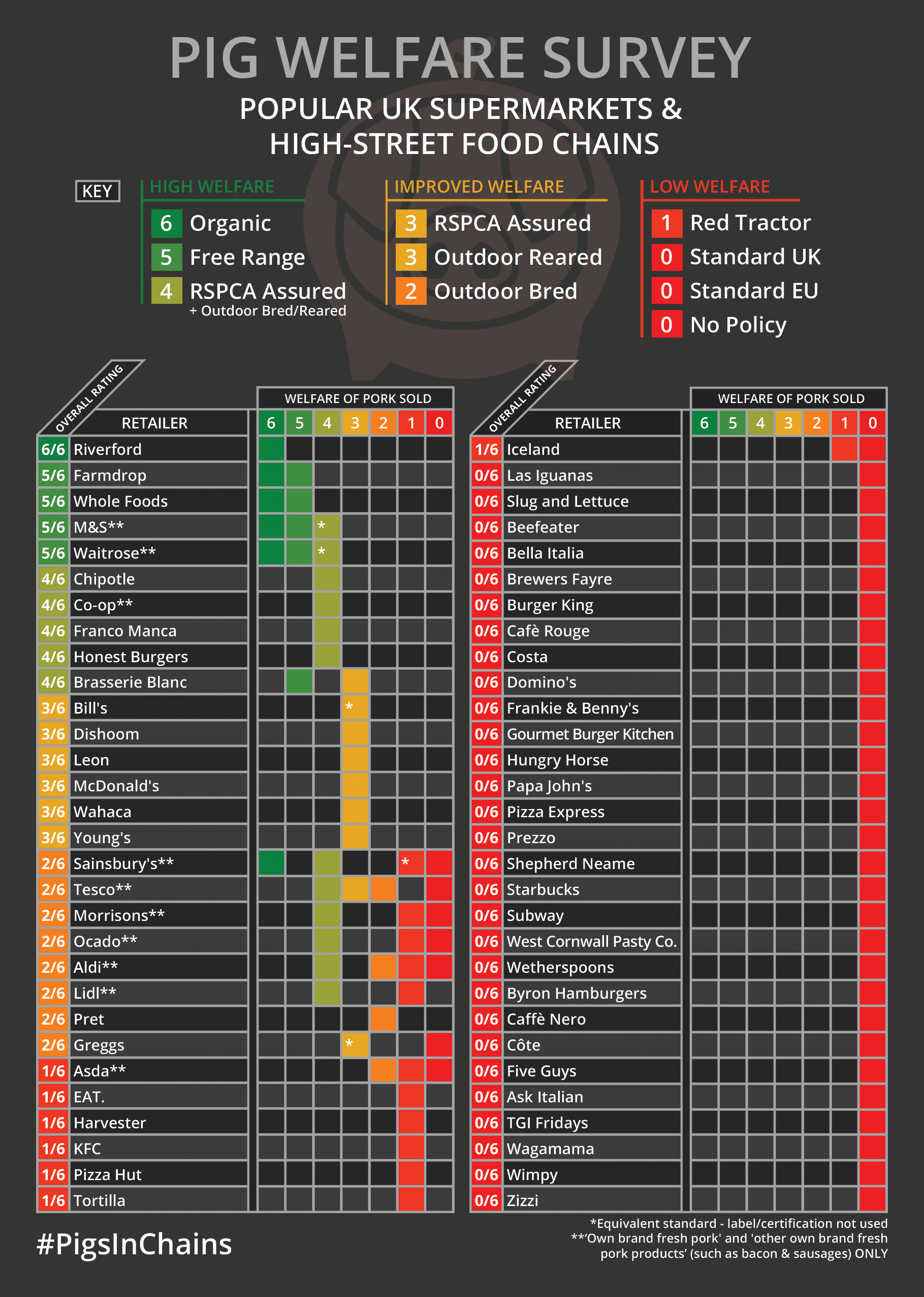 One of the ecological costs of the global pig industry is GM feed, imported from de-forested land in South America to feed UK animals, that damages the health of the animals, as well as humans, and the wellbeing of real farmers across the globe. Along with reducing our meat intake to free our precious land to grow organic food and protect wilderness, we must grow our own animal feed, thereby supplementing UK farmers’ livelihoods and reducing the huge environmental cost of shipping animal feed 8,000 miles.

Davinia Taylor (Hollyoaks fans may know her as Jude Cunningham) has teamed up with Helen Browning, Chief Executive of the Soil Association, in support of high welfare farming as they ‘turn their noses up’ at factory farming. Why not share your support for high welfare farmers and join them with your own #TurnYourNoseUp selfie. Don’t forget to use the hashtag, or tag us using @farmsnotfactory.

🚜 Massive protests in India On the outskirts of Delhi, hundreds of thousands of farmers have been blocking many of… Read More

🐷 Hurrah! What joy to hear about England and Wales imminent plans to ban the export of live animals for… Read More

Brilliant news! The High Court in New Zealand has ruled that the use of sow farrowing crates is unlawful, and… Read More

Due to the Tories’ massive majority, no amendments got into the UK Agriculture Bill that would ensure that our high… Read More