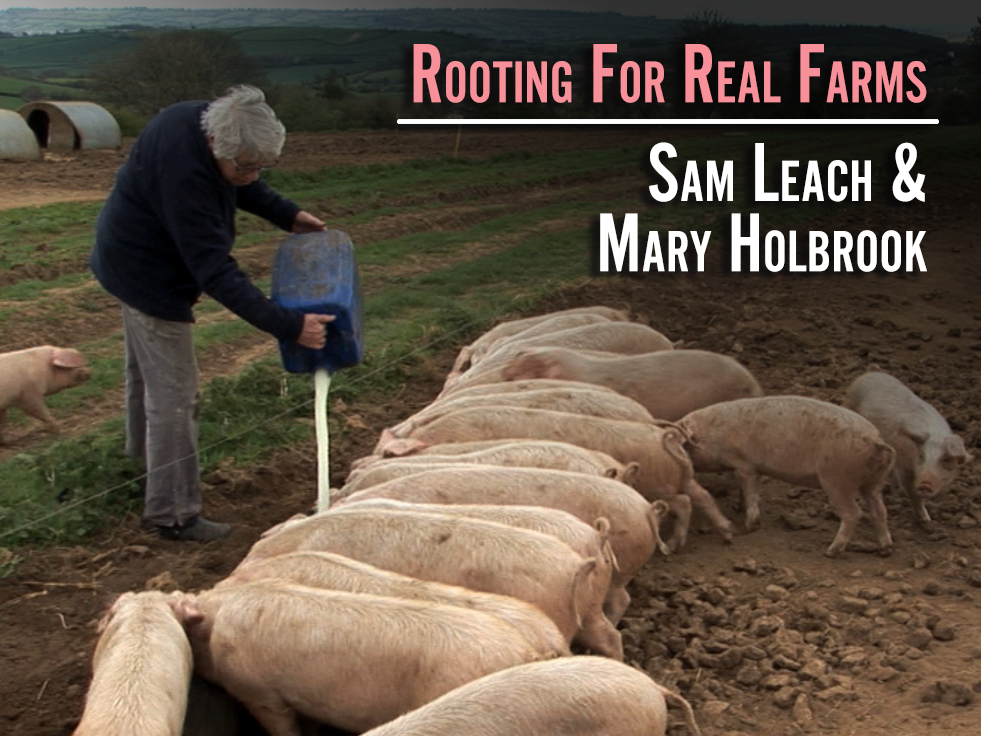 Mary Holbrook’s battered white van drew up outside Sam Leach’s Birch Restaurant in Bristol to deliver a half British Lop pig. Sam heaved it out and into the kitchen where he carefully and skilfully divided the cuts while explaining the different ways he uses the head, fat, bones, liver, tail and trotters. On the blackboard menu for that day was Pig’s Head Fritters and British Lop and Cider Pie – the pastry made from fat reclaimed from the carcass, the rest of the fat being used to roast potatoes or rendered into lard.

British Lop is the traditional breed of English pig that Mary breeds on a windy hillside in Somerset. The pigs have plenty of space and grow slowly allowing their muscle and fat to develop in the right proportions for the traditional nose to tail dishes that Sam creates.

It’s through the specials board that Sam offers the cuts that you rarely see on a menu. Each half pig’s two trotters, are stuffed, or added to the brawn (pig’s head in aspic) or reduced for stock. Likewise Sam brines and braises the tail, then fries it in breadcrumbs as a starter. The ear will be poached then deep fried as a snack. So the half carcass will be used to its full potential.

Mary with her free range pigs

‘What I really like about buying the half animal is that the menu has to change in order to use every part of the animal from the head to the trotters and everything in between. That’s a satisfying thing for a chef and an interesting thing for a customer, and it means that you’re doing the animal justice because you’re using everything.’

But for Sam it’s the fat from Mary’s pigs that guarantees the flavour due to its active, slow-grown and healthy life on the farm. Mary makes a traditional goats cheese from her herd of goats that crowd around, nuzzling and nibbling your clothes and anything else within reach. She feeds the whey from the cheese-making to the pigs, making their fat textured and full of flavour.

Mary explains, ‘it gives a really lovely creamy fat really good flavour and lays on a nice thickness and it’s not excessive. I think in more commercially raised pigs, (even though there often isn’t much or any fat at all), when there is the fat, it is usually not very tasty. I would rather eat fat than margarine that’s for sure, in terms of health.’

Once a fortnight Mary loads up the van with cheese and pork and heads to London to make the rounds of the restaurants lucky enough to have discovered the exceptional quality of her produce. By selling and delivering direct to the restaurants she gets a premium price that allows her to grow her pigs slowly and give them space to exercise and thrive in the fresh air and sunshine. ‘Actually’, she says,’ I’m not a country person, I was born in London suburbia, I really like going to London.’