COVID-19 has exposed the flaws in a centralised food system controlled by a few giant corporations. To be resilient to shocks, we need food systems to be diverse, small scale and local.

With so many links in our just-in-time food supply chain – from producer, to grader, to packer, to wholesaler, to regional distributor, to supermarket, and eventually to your plate – it takes one break and the whole system backs up. And right now it’s like a multi-car pile up.

The world’s biggest meat companies – including Smithfield Foods Inc, Cargill Inc, JBS USA and Tyson Foods Inc – have re-opened most of their slaughterhouses which were closed in April because of Covid-19, but at only 40% capacity because of social distancing and lack of staff. 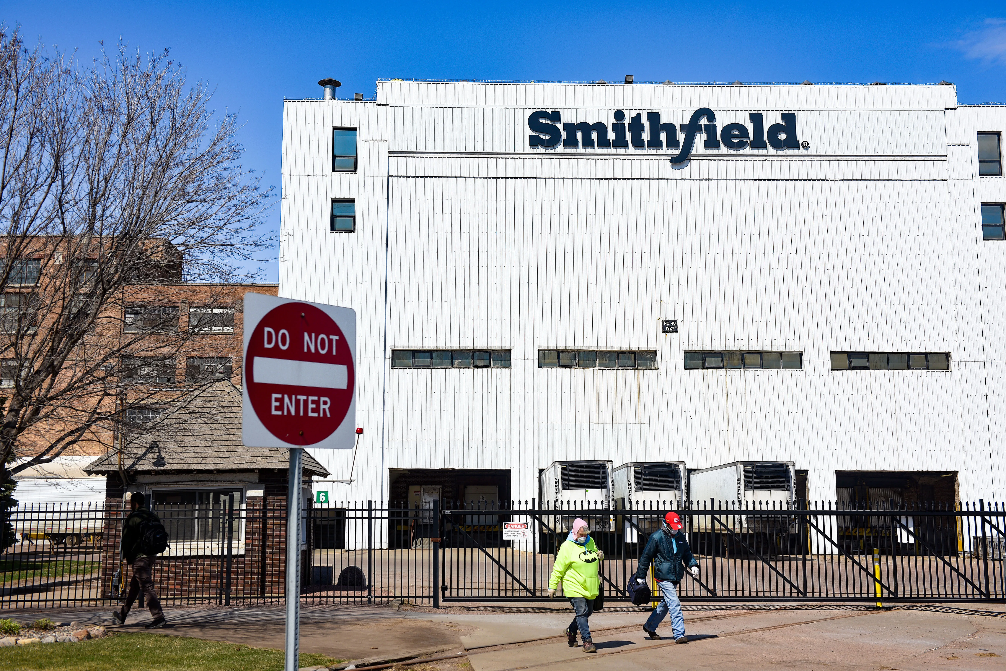 With the loss of capacity at meat packing plants, thousands of already fattened pigs remain on American and Canadian farms. There is no room for ‘waiting’ in the factory farming world, time is money after all, pigs are but a commodity. The farmers are forced to inject the sows to make them abort their litters, or euthanise the growing pigs, Farmers are already having to euthanise 700,000 pigs every week. The bodies of the euthanised pigs are composted and will become fertilizer at a time when the US is in a crisis that has idled millions of workers and forced many to rely on food banks. To add to this absurd situation, a third of US pork is exported while US pork consumers face shortages, and are having to pay inflated prices.

Meanwhile, as ever, US neighbours of factory pig farms are having to endure the toxic stench and don’t even benefit from the cheap pork products produced on their doorstep.

“One reason the North American industry is so efficient is we can produce a lot of meat in a short amount of time,” said Chad Hart, an agricultural economist at Iowa State University. “To do that you need a lot of employees working very closely together. So the same characteristics that make our industry efficient are also what this virus preys upon.”

Now is surely the time to question the ‘efficiency’ of a food system that produces pork fast and cheap only and allows the true costs to be mopped up by the health of animals, people and the environment, all of which suffer because of intensive industrial production.

You might expect that the powerful meat corporations would be economically suffering from the closure of plants. You’d be wrong. Tyson, JBS and WH group – who own Smithfield Foods – saw their stock market share price rise by 4.06%, 2.81% and 1.16% respectively on the 28th of April. As the supermarkets report a severe lack of pork on the shelves, so inflated pork prices benefit the processors. The farmers who are often contracted to one of the processing giants in this integrated system, are the big losers. A farmer in Canada that supplies Smithfield is currently getting $0 for a pig. An Iowa farmer paid quadruple prices to truck his pigs about seven hours to a Smithfield plant in Illinois following the closure of a plant in South Dakota. Meanwhile, customers have to spend 6% more on their pack of pork.

In America, the consolidation of the meat industry into the hands of an ever smaller number of packing houses was the norm even before their closure due to coronavirus, with the number of meat packing facilities having halved in the last 45 years. This means that animals already travel large distances for slaughter.

We might consider that this is the country that the UK is presently negotiating a trade treaty and the US livestock industry is determined that we import their meat! This is the system that the UK will have to compete with; a terrifying prospect to follow on from the demise of our own livestock industry thanks to the EU’s success in consolidating its own small scale family farms into factory farms. For example, in the mid 1990s, the European Bank for Reconstruction and Development, (EBRD) gave Smithfield Foods a cheap $25 million loan to come to Poland. To compete, the EU bureaucrats helped EU farmers morph into an intensified, monopolised and barbaric factory farming system.

The UK Minister for Agriculture, George Eustice, claims that vertical integration is the way forward for British farmers. So, unless he opens his eyes to the cause of the present potential collapse of the US food economy, we will continue to watch our small scale farmers, abattoirs, processors and butchers go bankrupt, threatening food security on our island.

In the UK today there are 278 abattoirs, down from 320 in 2003 and down from 1,890 in 1971. Due to the inherent cruelty in the speed at which the industrial system operates, the UK law changed to demand that a vet be on site for animal slaughter but the added costs have hit smaller businesses the hardest; a vet can cost up to £500 a day. Also because of economies of scale, larger businesses obviously outcompete smaller. These giant businesses employ lawyers to avoid taxes, and money leaves the locality as profits are invested in the global economy rather than local enterprise.

We are all complicit in this corporate take over when we buy cheap, low animal welfare pork. Please only buy meat with a high welfare label from the supermarket or, better, buy direct via high welfare box schemes like Farm Drop or look for a local farmer on the Big Barn website. Also sign our petition to ban low welfare imports, and to ban US style factory farms in the UK.