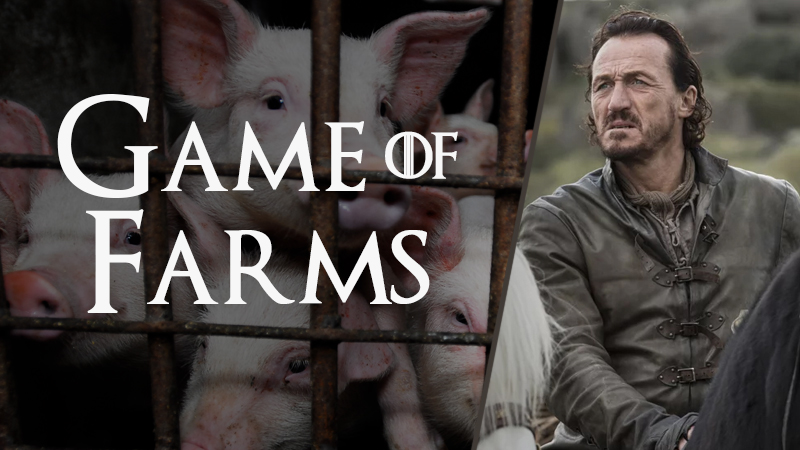 Jerome Flynn, known to many as Ser Bronn of the Blackwater, presents a series of ten 2-minute videos highlighting animal cruelty[1], antibiotics overuse and distorted planning procedures as some of the systemic failures of factory pig farming. Jerome is urging people to sign this petition for an immediate ban on the building of new (and expansion of existing) factory farms.

There has been an alarming 26% rise[2] of intensive US-style factory farms in the UK since 2011. In Northern Ireland alone, 14 pig factories are currently seeking planning permission. In these intensive systems, animals are crammed into barren concrete pens where, stressed and sick, they need routine doses of antibiotics[3] just to keep them alive. Antibiotic overuse leads to antibiotic resistant bacteria that can pass to humans, while excessive quantities of toxic animal waste poisons the surrounding air, soil, rivers, lakes and the sea.

World famous for dramatic landscapes and pristine habitats, Northern Ireland is now attracting more and more visitors who come to see the iconic locations filmed for Game of Thrones. Limavady, near Lough Foyle and Binevenagh Mountain, is one such location threatened with plans to build a massive 40,000 pig factory farm unit that would pollute the surrounding countryside with over 66,000 tonnes of pig slurry per year – equivalent to the raw human sewage from the whole of Belfast.

Jerome says, “It’s a majestic, beautiful land which, as soon as you bring in a factory farm, is completely ruined. It’s polluted. People won’t want to walk there anymore. It becomes dangerous for children to play there. Let’s subsidise the local farmers who want to ethically rear their animals and want to give them a life that’s worth living, the free life that they deserve. Let’s support them rather than pouring money into an industry which is threatening the whole balance of the ecosystem.”

Anaerobic Digesters (ADs), that generate renewable energy from animal farm waste, were attracting subsidies at double the rate paid in the rest of the UK. Although this scheme is now closed, ADs already built will benefit from payments averaging £900,000 per year for the next 20 years. This has encouraged plans to build 14 new pig factories, still currently seeking planning permission, that would feed their waste to ADs. Because ADs need a 50% mixture of livestock waste and green silage, the amount of slurry from ADs is twice as much as if the animal waste was spread directly from the farms onto fields. The subsidies for electricity generated by ADs are paid to the investors from a levy on UK energy bills averaging £200 per household per year.

The untreated slurry is spread onto surrounding fields close to houses, schools and public footpaths. The slurry contains high levels of ammonia that causes respiratory problems[4] in humans and damages sensitive natural habitats. According to the Northern Ireland Environment Agency, 98% of Special Areas of Conservation have already exceeded critical thresholds for ammonia emissions at which ecological damage occurs[5]. The UK government is expected to have to pay multi-million pound fines by the EU for breaching limits set down by the Nitrates Directive and failing to protect designated habitats.

James Orr, director of Friends of the Earth Northern Ireland, says: “Northern Ireland is already plagued by shocking levels of ammonia emissions. Releasing further ammonia from pig slurry into Northern Ireland’s ecosystems will lead to environmental disaster. Intensive agriculture and the associated problems with a massive increase in pig slurry cannot be the path to a healthy future for Northern Ireland.”

Tracy Worcester, director of Farms Not Factories, says: “We can use the power of our purse to only buy from real farms, not animal factories. When buying pork, look for the high welfare labels Outdoor Bred, RSPCA Assured, Free Range or best of all Organic. When waste is produced by a moderate number of animals on a farm, it is not pollution but a fertiliser. Find out how to boycott pork from factory farms by reading at our informative guide to labels & supermarkets.”

[1] Pig factories are defined as intensive, indoor, industrial facilities in which pigs are kept on concrete slatted floors, illegally deprived of straw or similar manipulable material, routinely dosed with antibiotics and where routine tail-docking, although illegal, is common practice. Stress from overcrowding causes pigs to bite off each other’s tails. To prevent this factory farms routinely cut off piglets’ tails although this practice is illegal. In the UK, for 2.5 months of the year mother pigs are kept in narrow metal cages so small that they are unable to turn around. In the EU, from where around 50% of UK pork is imported, it is legal to keep mother pigs in cages for an additional 2 months per year, a total of 4.5 months of the year.

[2]A significant growth in the pig population is worsening Northern Ireland’s problem with ammonia, according to a government report. The number of pigs went up by 48% in the 10 years to 2016.
BBC News – Rising NI pig numbers increases air pollution
The Guardian – UK Mega-Farm Investigation

[3]Because piglets are weaned after only 21 days when their immune system is still weak and because overcrowding and lack of bedding mean the pigs suffer stress and disease, they have to be routinely given antibiotics.
About 25% of all antibiotics sold in the UK are routinely given to mostly healthy pigs in factory farms.
World Health Organisation – Tackling antibiotic resistance from a food safety perspective in Europe
The Guardian – Medics Call for Ban to Cut Antibiotic Resistance