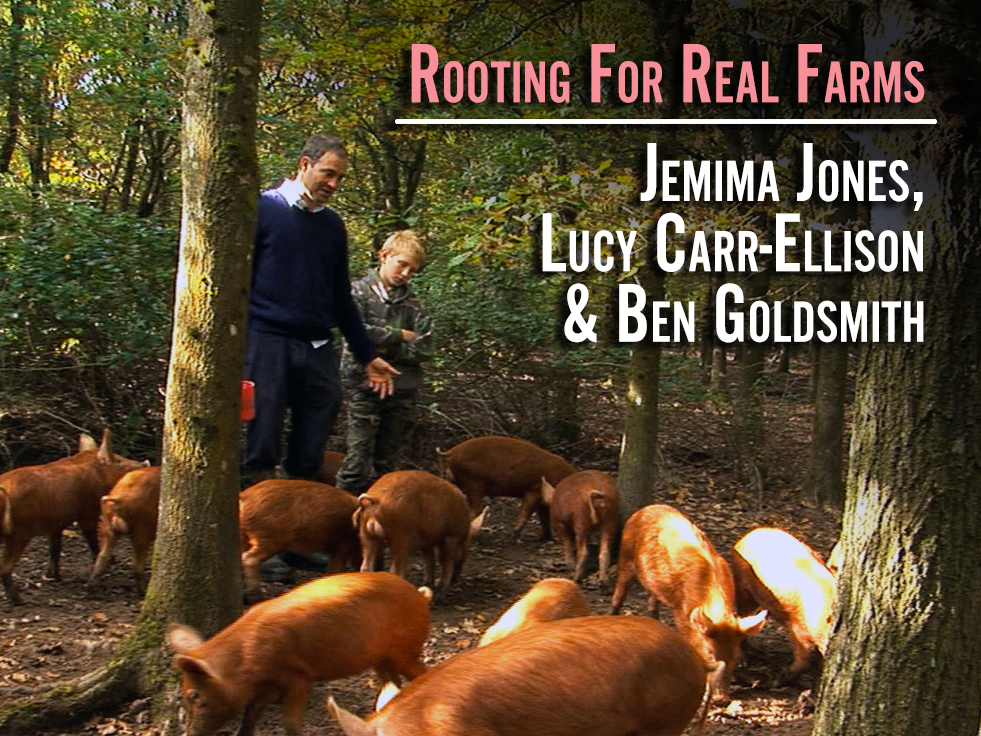 Of all the rare pig breeds, Tamworths are the most closely related to the Forest Pig that roamed  through the oak woods that covered the English countryside at the end of the ice age 10,000 years ago. That’s why Ben and Jemima Goldsmith’s Tamworths thrive so well eating acorns and rooting for grubs in a mixed hardwood where the ground is covered with leaves, rotting branches and soft damp earth that enable the pigs to herd together and forage  according to their natural instincts. At dusk we filmed several litters of three month old piglets rooting through the forest for the last feed of the day as they have been doing in the wild for thousands of years.

Contrast this pig heaven with a piglet born in an animal factory onto a bare concrete floor, its mother trapped in a steel cage too narrow for her to turn around to nurse her piglets, its tail and teeth docked in the first week to allow unnaturally high density of animals who otherwise bite each other tails in stress and frustration. To increase productivity the piglets are removed from their mothers when they’re only three weeks old, and because their immune systems are not yet developed they are given antibiotics to prevent them catching diseases and dying in the unhealthy overcrowded conditions.

Ben, his son Frankie and two of their Tamworth pigs.

Jemima and Lucy Carr-Ellison run Tart which caters for fashion and film shoots, weddings and garden parties, and use Ben’s Tamworth for their pork dishes, knowing that their clients insist on high welfare pork, both for ethical reasons and because the taste and texture are in a different league entirely from an animal that has suffered all its life from the torture of confinement, stress and ill health.

Ben and his son Frankie were feeding surplus apples and pears to the piglets who were already stuffed with October acorns that covered the forest floor. “I think there’s no purer demonstration of the arrogance of industrial man than factory farming of pigs”, Ben says, “it’s brutally cruel. You strip them of everything, the love of their mother when they’re born, the ability to turn 90 degrees, the sun on their backs, fresh air, putting their nose in the ground, smelling stuff, interacting with other pigs, being living pigs.”

“Look at the noses in the soil here, look what a happy time they’re having, and it seems like a fair contract, we’re going to eat these things so let’s let them have a fair life and express their natural behaviour, and keeping pigs outdoors is not a big deal, there’s loads of land on which it’s not productive to produce crops for humans, and that land’s perfect for pigs. Raise them on a small scale and do so in a way that’s fair.”

Jemima, Lucy and Ben turning their noses up at factory farming.

Our campaign Farms Not Factories is aimed at changing people’s attitudes by exposing the realities of factory pig farming, and contrasting that with the life led by pigs on healthy and humane farms, either outdoors, or indoors with plenty of straw bedding, fresh air and sunlight. There is a small additional cost for high welfare which can be offset by eating less but better pork or choosing the less popular cuts which chefs are using more and more to create new tastes and textures from pigs that have had a varied diet, lived active lives, and so developed muscles and fat in the right proportions.

The last word comes from Frankie, who instinctively understands the very simple solution, “Don’t buy factory pig farmed pork, definitely don’t, it just tastes really bad and it will get way more popular, when everybody buys it they’ll get more and more pigs to replace that pig that you bought, and then it will just get bigger and bigger and bigger until it’s too big to stop and it will just carry on going forever. You should buy the free range pigs because they’ve had a happy life and if they do get replaced the pigs they get replaced with they’ll have a happy life and it’ll go round and round and round.”