‘Free trade’ - but who’s really paying for it? • Farms Not Factories 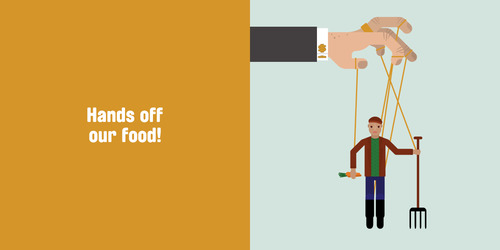 The Transatlantic Trade and Investment Partnership is a ‘free trade’ agreement being negotiated – in secret – between the European Union and the US. Leaked documents suggest that if pushed through, TTIP will be disastrous to food and farming in the UK. It will remove food safety rules, get rid of regulations that protect the environment and grant big business the power to sue the government.

TTIP stipulates “regulatory coherence”, which essentially means a ‘race to the bottom’ when it comes to food safety and environmental protection. This would be a disaster in the EU, which has higher standards on food quality, safety and animal welfare than the US. Rules and regulations that currently apply in the EU will, under TTIP, be “harmonised” to US standards.

For countries in the EU, this would mean:

•      No labelling for; GM foods and ingredients, animal cloning, method of production or origin of product, thereby undermining consumers’ right to make an informed choice about what they eat.

•      Treatment of meat with chemicals such as chlorine and lactic acid. If TTIP were to go through, existing bans on the treatment of meat with anything other than water, would be lifted in the process of harmonisation with the US. TTIP will also mean the use of antibiotics and ractopamine as growth promoters, which were originally banned in the EU due to the threat of antibiotic resistance and impacts to animal welfare, respectively. US National Pork Producers’ Council have said they would not accept any result in which widespread hormonal therapy is still prohibited.

•      Fewer restrictions on GM. 70% of processed foods in US supermarkets have GM ingredients, while virtually no GM is allowed to be grown or sold in the EU

•      Use of animal byproducts in animal feed, which were restricted in the EU after outbreaks of swine flu, foot-and-mouth and mad cow disease. TTIP will also mean faster approvals of GM animal feed. In the EU, each new GM trait requires approval but the US grain industry wants seeds with multiple GM traits to be approved at the same time, in order to speed up the process.

•      Lower animal welfare standards, like the roll-back of the EU Directive on the welfare of pigs, passed in January 2013 where the pig gestation (pregnancy) crate was partially banned.

TTIP will also undermine the EU’s “precautionary principle” for food safety standards. The precautionary principle ensures that new products with a potential risk to health must be determined safe before being allowed on the market. In the US, the principle is reversed; new products must be proven unsafe before regulatory restrictions can be imposed. This will have massive consequences for the changes highlighted above, since we will have no way of knowing how harmful they are – to people and the planet – until they have already been put to use.

The harmonisation of standards is just a method for corporations to externalise their costs onto people, other animals and the environment. Another way that TTIP aims to do this is through the introduction of Investor-State Dispute Settlements (ISDS). ISDS will allow corporations to bypass domestic laws in order to sue governments that pass regulations that harm profits. And taxpayers will foot the bill. The precedent has already been set by other free-trade agreements like NAFTA. For example, when residents of Quebec voted against fracking, a fracking company sued the Canadian government for $250 million.

Through harmonising standards and allowing corporations to sue governments, TTIP will take power from the people and place it firmly in the hands of big business. The agribusiness industry on both sides of the Atlantic is lobbying for a rollback of regulations at the expense of consumer choice, health and safety, animal welfare and environmental protection.

We need to come together to defeat TTIP.

Join us at the next #noTTIP day of action tomorrow, Saturday 11 October and find out more about TTIP and the #noTTIP coalition here.