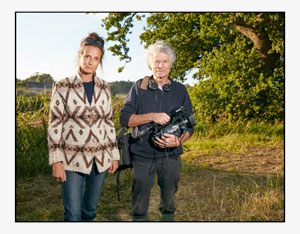 Late one evening last week, uninvited, I entered into a pig farm in the English countryside to film what I knew to be horrendous conditions for the animals there. We waited till the workers had clocked off and climbed over a wall into the farm. If my cameraman and I were caught, I knew we could be prosecuted for trespassing so it was fairly nerve wracking but perhaps ‘public interest’ would let me off the charges. It was a risk, but one worth taking to shine a light on what is happening in farms all over this country.

If British consumers could see the way pigs are raised, I reasoned, they would make sure they buy pork from farms where pigs live well and are taken care of.

I had done a recce so I knew this farm was breaking numerous welfare laws and nothing had changed when I returned. None of the pigs had any of the legally required soft material like straw to lie on or where they can imitate their natural environment like rooting the soil in search of food. Instead, they were crammed in small pens on bare slats, (for draining the effluent), or in their own excrement on hard concrete. Even worse, mothering pigs suckling piglets were in crates so small they couldn’t turn around. They will stay like this for 3-4 weeks until their piglets are weaned. This is tantamount to torture, the reason why high welfare farms do not allow crates like this: mother and piglets are free to roam when outside and in deep straw when inside I noticed that all of the pigs – even the tiniest newborns – had their tails docked. This is a bad sign – and, once again, against the law – as it is a practice only used when fattening pigs are kept in conditions so stressful they start biting each other’s tails. The law says farmers must correct the conditions that drive them to bite each other’s tails and not just routinely dock them. A butcher will tell you that a pig with an intact tail reveals that it had a good life yet Compassion in World Farming estimates 88% of pork sold in British supermarkets come from tail-docked pigs from the UK and EU.

The fact is that the Great British Bacon Butty is often not British at all. Some 54% of our pork is imported – mostly from pig factories in Germany, Denmark and the Netherlands made in conditions that would be illegal in the UK. Some might come from as far as Chile where I filmed the local people’s successful battle to close the world’s biggest, a 2.5 million pig factory. These cheap imports from giant corporate animal factories undermine British farmers who, with higher welfare standards and smaller scale farms than our European partners, cannot compete.

I wish I could say that this farm was unusual in its cruelty but it’s not. It’s typical of farms throughout Britain. But I have chosen not to identify the farm itself because this farmer – and others like him – is not the enemy but the victim of a system that treats animals like commodities – much like fridges or car parts. Giant pig factories taking advantage of cheap labour and lax welfare laws in Eastern Europe are pushing our British farmers to the wall with cheap imports. For struggling British farmers cutting corners in animal welfare becomes the only option to avoid going bankrupt. In the last fifteen years in Britain we have lost half of our sow population which has eradicated many of our small and medium sized farms. Once they are gone, they are gone forever and their skills to feed us which healthy meat go with them.

We pride ourselves on being a nation of animal lovers and our rules on pig welfare are among the strictest in the world but we need to face the truth about the meat and, in particular, the pork that we buy. By using our power as consumers, we can chose pork from high welfare labels – like RSPCA, Free Range, Outdoor Bred and Organic and change the system. The power is in our purse. These giant producers exploit cheap labour abroad and then flood our supermarket shelves with cheap food. When we buy from them we buy into a system that contributes to the suffering of millions of animals, pollutes our air and water and sucks our local economy dry.

When I was co-lead in the hit TV series, C.A.T.S Eyes and after I married the Marques of Worcester, there was a sudden media interest in the type of shampoo I used or where I went on holiday. I decided to use this attention to press a cause close to my heart: the plight of our real farmers as we are flooded by cheap meat produced by unaccountable corporations in an unhealthy and unsustainable industrialized system of food production. I also no longer needed a salary so I was able to direct my time and passion towards a movement to protect our farmers and ensure that we all have access to good, healthy food. So, for the last ten years, I have used film to spread the message further and used my privileged connections to raise money to make films to show the horrors that exist behind the closed doors of pig factories, clambering over walls and razor wire fences and creeping around stinking pig factories gathering evidence of animal cruelty – usually in factories abroad.

My eyes were opened in 2005 to the plight of pigs and their owners was when I was invited to film undercover at a pig factory in Poland owned by Smithfield Foods, the largest meat producing and processing company in the world. We filmed secretly with a hand-held camera through broken ventilation shafts and exposed windows.

In one shed, thousands of pigs were crammed together in tight pens on barren concrete and slatted floors. Snorting and squealing in distress, some had gnawed on the steel bars until their gums were bleeding. The smell of biodegrading faeces was indescribable. Another shed contained row upon row of lactating sows in crates so small they couldn’t turn around. Following the flies to a large plastic bin in the yard, we found piles of dead pigs and piglets that could not survive the overcrowded, contagious conditions. And dead and decaying pigs were floating in the farm effluent storage lagoon.

What I saw was so appalling that I vowed to put all my time and resources into informing the British public about this barbaric system destined to be sold in UK supermarkets and galvanising a consumer movement to protect our higher welfare farming methods by shunning low welfare pork from across our borders and prevent factory farms springing up in our country. My organisation Farms Not Factories was born.

I kept pigs for a while and they are charming creatures. Social, affectionate, inquisitive and, contrary to the stereotype, very clean. Their snouts, designed to find food and used to greet other pigs also sniff out their human carers and are incredibly responsive to stimuli. In the wild, pigs form stable family units led by a matriarch, much like the social structures of elephants, and, as with most mammals, there is a strong bond between a mother and her piglets.

Although, no creature on earth should be kept in the appalling conditions that I have witnessed around the world, it is all the more heartbreaking when you understand how intelligent and sensitive pigs are. Studies in the Nineties show pigs to be quick learners able to respond to commands much like dogs and perform tasks previously only given to chimpanzees.

Animal factories are not only abusive to animals; they also pose a serious risk to human health by the overuse of antibiotic. In the farm I visited last week, I found a drug that is used to calm stressed animals, a bottle of antibiotics and syringes. Keeping animals in such unnatural, crowded and unhygienic conditions promotes disease so factory pigs are given routine doses of antibiotics as a preventive to keep diseases at bay for long enough to get them to slaughter.

Alarmed at increasing resistance, doctors and hospitals are reducing antibiotic use while use by factory farms is increasing. In the UK 45% of antibiotics sold are to treat animals (25% to pigs) and in the US over 80% of all antibiotics are used by agribusiness. In 2014, 9% of fresh pork from supermarkets was found to have the pig strain of MRSA. All this over-use of livestock antibiotics is fuelling the proliferation of antibiotic resistant bacteria helping to make some human diseases more and more difficult to treat. Doctors are warning that we could be seeing the end of antibiotics as a cure for human diseases. Hailed as a miracle cure for some 75 years, we could be undoing the greatest achievement in modern medicine.

It is time that we woke up to the true cost of cheap meat.

Every time we buy sausages or bacon from imported, factory raised pigs we are directly contributing to industrial scale animal cruelty. And yet the price of high welfare meat is not so very high. Two sausages from a factory farmed pig costs the same as one and half sausages from a farm where pigs are raised in humane conditions. Surely avoiding animal cruelty and the end of antibiotics is worth half a sausage? And reducing our meat intake will help reduce illnesses like obesity, diabetes, heart disease and cancer.

I grew up in the countryside near farmers who loved their animals and I know that, if it was economically viable, farms like the one I visited last week would prefer to treat their animals well. While government could impose tariff barriers on cheap imports to guarantee the British farmer a fair price they are reluctant to do. So, that leaves it up to us. By buying higher welfare meat, we are ensuring the survival of British farmers who could and would revert back to good animal husbandry practiced for generations before factory farming and the ‘free market’ began treating food as though it were a toaster or car part.

The good news is that since I started making films, in 2005, we’ve seen a huge evolution in lifestyle habits. People want to know where their food comes from; the horsemeat scandal in 2013 exposed the corruption and fraud inherent in long food chains in this centralized system of production, processing, distribution and retailing. As a result of all the food scandals and supermarket recalls, the movements in slow food, local and organic, vegetarian and vegan have grown exponentially. And, due to the extermination of the farmer’s producing high welfare pork in the US, fast food giant Chipotle now sources almost all its pork from the UK. In fact, the only growth in the agriculture sector are in niche markets like higher welfare meat.

Our most recent campaign, endorsed by some deeply concerned and passionate celebrities, like Dominic West, Vivienne Westwood, Jeremy Irons, Moby and Joanna Lumley, has touched hundreds of thousands of people around the country. We asked them to take a selfie with their nose turned up, hashtag it #TurnYourNoseUp and post it on line where they can watch a celebrity led film about the horrors of animal factories. The message to viewers is to only buy pork with the high welfare labels RSPCA Assured, Outdoor Bred, Free Range or Organic.

Each time we buy pork we vote for the system that produced it. Vote for pigs raised in this country in farms where the mothers are allowed to roam, and the piglets are in comfort and where our farmers receive a fair price for their good animal husbandry. Buy bacon for your Great British Bacon Butty from a real high welfare British farm and not a factory.

Read the follow up article: Not just cruel to pigs – farmers are the other victims of intensive animal farming