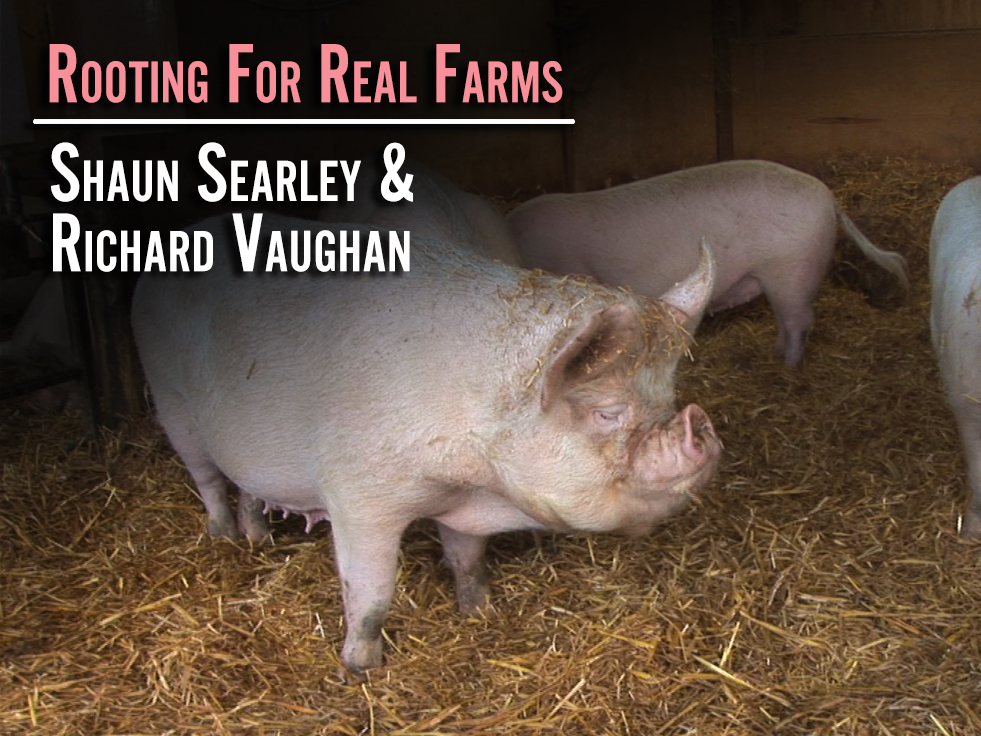 Richard Vaughan’s Middle White pigs with their unique snub noses, are one of the rarest pig breeds. Marco Polo brought them to Europe from China and now there are only 350 left in Britain, 120 of which are on deep, fresh straw on Richard’s farm in the Wye Valley. They produce top quality pork used by famous chefs all over the country, including Shaun Searley at Quality Chop House, Fergus Henderson at St John’s, Michel Roux, Jeremy Lee at Quo Vadis, Bruce Poole at Chez Bruce and Simon Rogan at l’Enclume in Cartmell.

Richard told us, ‘There are about 1,800 giant pandas in the world and there are 350 Middle White sows. People get very excited about wild animals but we need to get excited about farm life and the way to preserve them is to eat them. It seems rather contrary, but then they have a proper place in life where they can be exalted and looked after and we’re trying to give them a really good life before they give us stunning food. To me food should be about eating things which are really delicious not just filling your face.’

This exactly matches Shaun Searley’s food ethos at the Quality Chop House, and is why he sources Richard’s pork. ‘At the forefront of every menu decision is ingredients and any kind of stylistic direction second.’ The restaurant has been open for five years and has regulars who keep coming back because they know that the ingredients are impeccably sourced.

A special feature of Middle Whites is the superior flavour of the fat, Shaun told us. ‘Pork belly is made up of fat, meat, fat, meat and that’s why people enjoy it so much. You get the flavour and sweetness of the fat, mixed and layered upon beautiful soft meat. Just to give you an idea of the marbling and layers on the middle white just cut into it and you can hear the level of crackling, you can see fat and meat and then it rounds off with some beautiful rind, and I believe that’s down to the way it’s been cared for.’

Shaun in his kitchen at the Quality Chop House

Richard told us that when Middle Whites were introduced to Japan the emperor would not eat any other pork and had a monument put up in honour of the breed. ‘The reliance farmers like me have with the informed consumer is essential; without having customers there is no point. I don’t keep them for fun, I keep them to try and have a sensible business, employ people and produce something I’m proud of. When I dealt with the supermarkets they said if it was cheaper we’d be interested. Ghastly business. The important thing is don’t go for cheap, industrial pork, just turn your nose up at that sort of thing.’