James Strawbridge loves being outdoors and active, cooking, foraging, gig-rowing, painting and walking in all weathers along the coastal paths of South Cornwall where he lives and where The Strawbridge Kitchen is based.

James’ dad, Colonel Dick Strawbridge (MBE) and his stepmother Angel co-present the Channel 4 blockbuster series Escape to the Chateau in which James appears from time to time. James and Dick’s first project together was The Hungry Sailors, a series of 50 episodes for ITV in which they sailed around the Cornish coast, the Scilly Isles and the Channel Islands, visiting local food producers and inviting them onto their 45 foot Pilot Cutter The Morwenna for a cooking competition. (Watch S2 E4 here)

James’ new cookbook The Artisan Kitchen has been shortlisted for the General Cookbook Award at the Guild of Food Writers 2021 Awards.

‘For too long we have been separated from the ingredients that go into our cooking, but now we are re discovering that connection and realising how accessible artisan food is’

The Artisan Kitchen is a manual for connected, local, foraged and traditionally preserved foods, bringing us back to the age when seasonal locally-sourced food was preserved in ways that made it even more delicious and diverse.

In contrast to the warm sunny weather when we filmed James on the Cornish coast, there was a howling gale and driving rain on the day we filmed at Coombe Farm Organic, so the pigs had come inside for shelter in a spacious barn where they played with the deep straw that they could shake around, lie down on and generally use to dry and warm up.

James explains; “Living outdoors is obviously vital for the well being of these intelligent creatures, but it’s also vital for the production of top-quality pork. Muscles that have had plenty of active exercise produce flavoursome meat with great texture.”

Jemima sat on the straw surrounded by happy, active pigs and explained why, 20 years ago, at Coombe Farm they’d decided to produce to the strict welfare, medicine, soil and feed standards needed to be certified Organic by the Soil Association.

“When you pay for a certified organic product, you aren’t buying into a vague idea or a false promise. You’re buying into a promise that’s legislated, regulated, inspected, consistent and licensed. It’s a method of farming and food production that demands a lot of hard work.”

From field to fork, the supply chain at Coombe Farm is definitively local with the breeding, growing, slaughtering, butchering and marketing all taking place within a radius of only 7 miles. 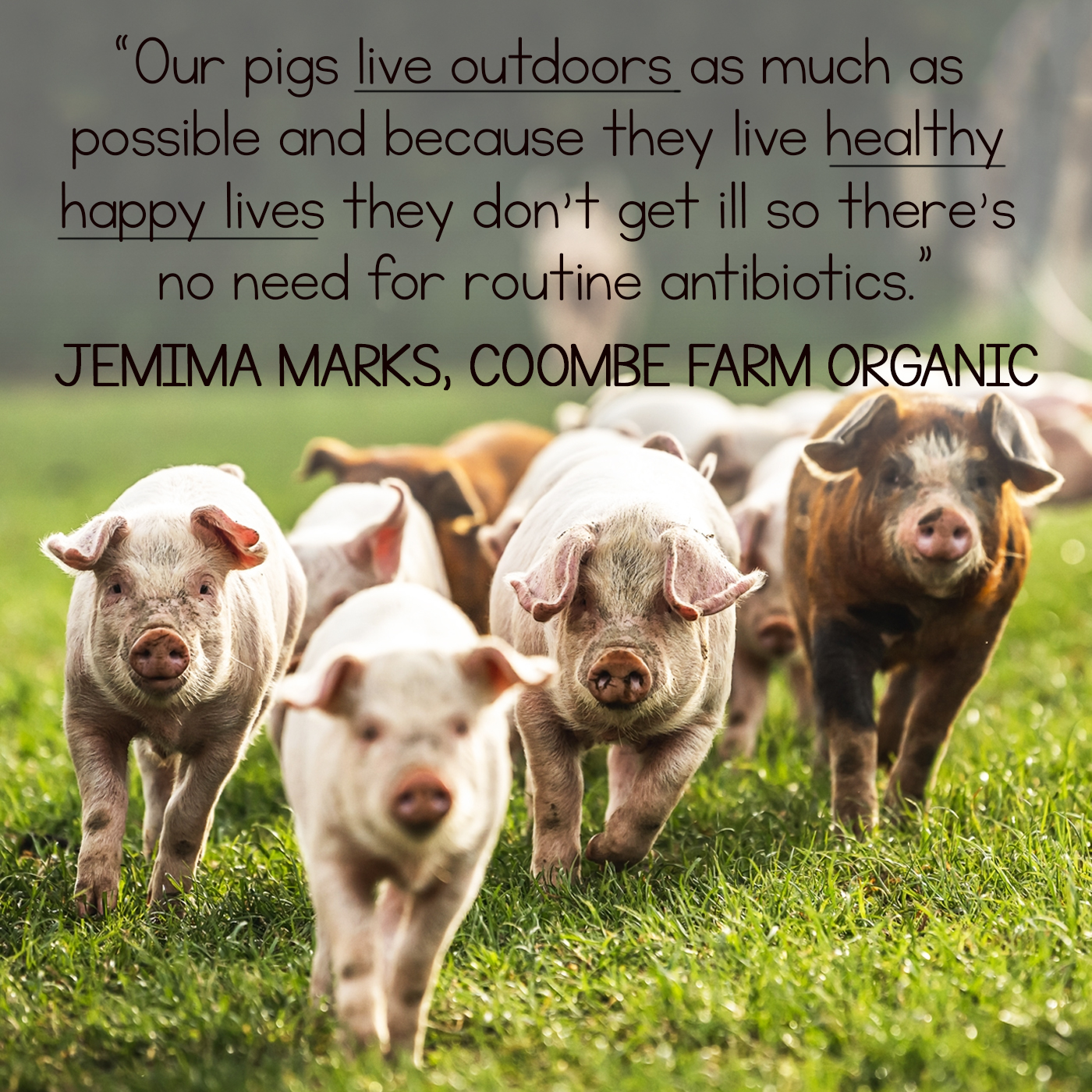