This week’s instalment of A Pig’s Life – a series of oil paintings and poems by Harriet Clark – is called ‘Up Our Antibiotics’. Pigs raised on high welfare farms, either outdoors or indoors with plenty of space and bedding, are healthy and rarely need antibiotics or other medication. By buying pork with a high welfare label you’re supporting British farmers and reducing the risk of antibiotic-resistant diseases.

An initiative to develop bespoke antibiotics for livestock has been set up with Scotland’s 5th largest GHG-emitting company and global petrochemical manufacturer, Ineos as the main funder. Peter Stevenson, Chief Policy Advisor at Compassion in World Farming, called animal-only antibiotics a “techno-fix designed to tackle the symptoms of industrial animal agriculture rather than recognising the need for transformative change” 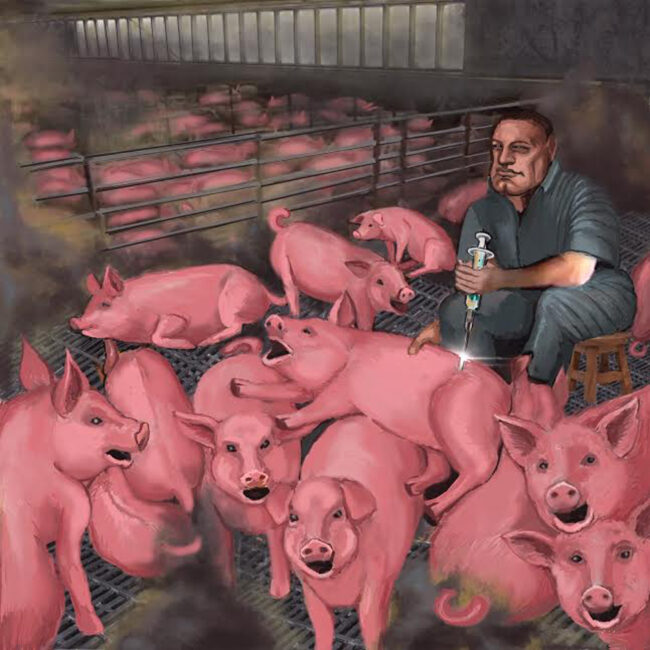 Sadly, we must rely on people using the power of their purse to prioritise animal health and welfare and the environment since this was obviously too much to ask from the 80-seat Tory majority. They voted against an amendment proposed by the House of Lords to “establish a code of practice designed to ensure that new trade deals do not undermine existing standards on environmental protection, food and animal welfare”.

Tory MPs also voted against the Lords amendment that would allow MPs to debate the terms of trade deals and vote on them. This table compares the UK’s scrutiny processes compared to those of key trading partners. 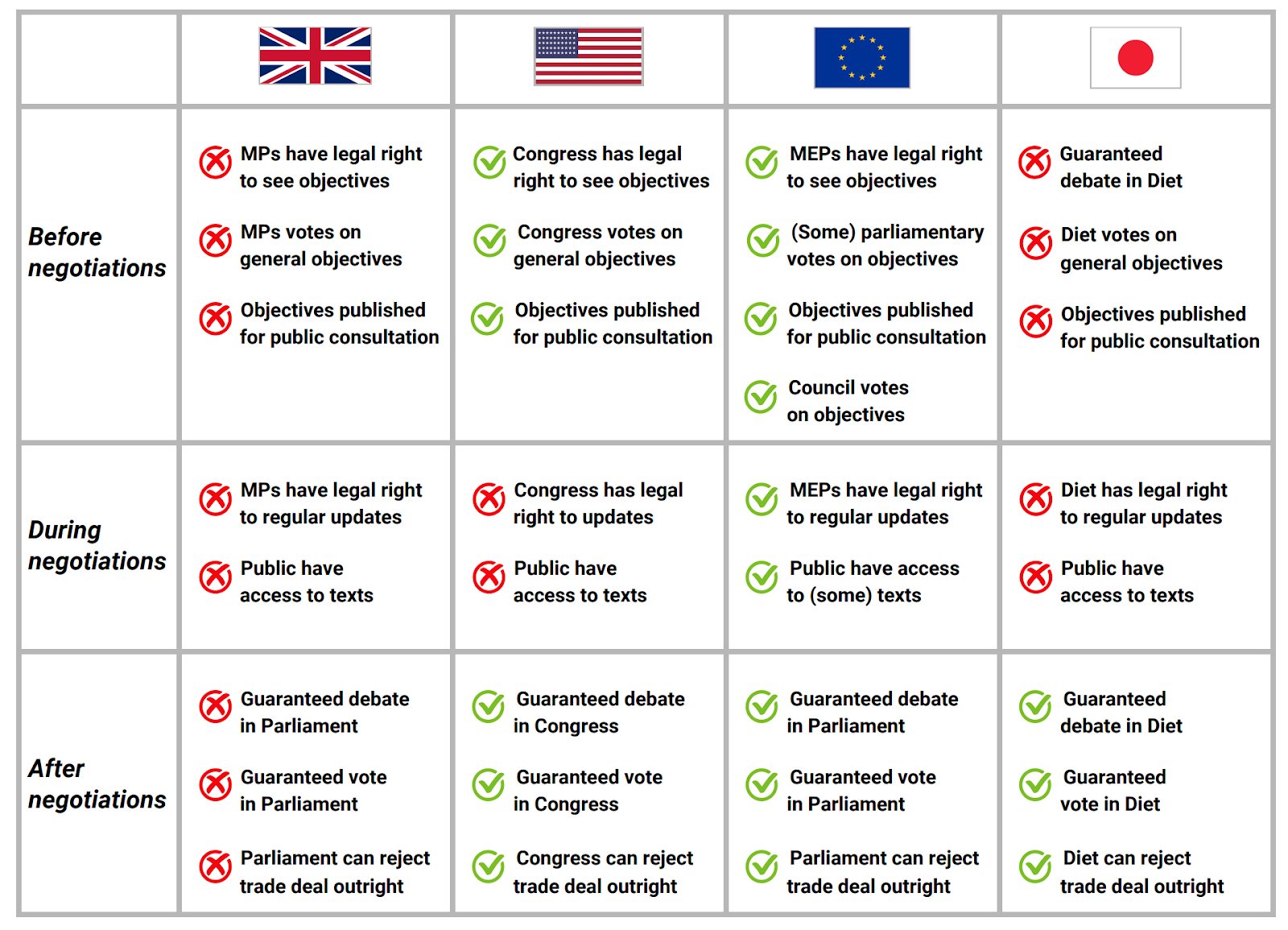 This government’s track record of U-turns, cronyism and unaccountable in-house deals made the passing of this amendment all the more important. However MPs unbelievably voted 352 to 277 (all Tories bar 11 rebels) to deprive themselves of powers to oversee and debate future trade agreements thus making themselves and parliament evermore redundant.

In fact, all amendments brought to the House of Commons regarding the Trade Bill on Tuesday were defeated, including amendments that sought to protect the NHS from US trade deals and amendments that would allow courts the power to restrict trade with states accused of genocide.

The trade bill was not sent on to the Royal Assent stage and will instead return to the House of Lords on the 2nd Feb where amendments are expected to be added and returned to the House of Commons for another round of votes. This has provided vital time for us all to write to our MPs asking them to protect standards in law via this link from Biteback

? Rotting meat at the border

British meat exporters joined fishermen yesterday to warn Parliament that their exports to Europe are being crippled by post-Brexit customs red tape. According to the National Pig Association (NPA), one load of pork was held up at Calais for 20 hours undergoing vet checks and then rejected upon finally reaching its destination in Germany because of the delay.

Perhaps these delays are a wake-up call. Rather than governments constantly promoting long distance trade, treaties should promote local production for local consumption. For goods that cannot be produced locally such as tea, pineapples etc, prices must internalise the true cost of production and be produced to high food safety, labour and environmental standards. Only then will the race to the bottom between trading nations and competing companies finally end. Until then, countries that lead in imposing high standards will be at a competitive disadvantage from low standard imports. When Germany recently banned narrow, steel farrowing crates that confine pigs for 5 weeks (while they give birth to and suckle their piglets), the UK pig Industry representative, Zoe Davies was very much against the UK government following suit. I sympathise with her logic; “… as we negotiate new trade deals, we must not end up in the situation we found ourselves after the UK banned sow stalls in 1999, losing our own producers only to import pork in large quantities produced from systems using sow stalls. A repeat would be a disaster for the UK pig sector and do nothing for the welfare of pigs.” The cruelty would simply be exported until governments across the world introduce a treaty simultaneously.

Simpol (short for simultaneous policy) promotes exactly this; countries take the decision to protect food safety, animal welfare, environmental and labour standards together and sanction trade with any country that doesn’t join.

The FAIRR Initiative is an investor advisory and research network focused on sustainable protein production whose members manage $27tn worth of assets. Their spokesman in this week’s FT report says that more investors are now concerned about the risks for food production linked to climate change. “Unless things are done, there is a risk that [the meat industry] becomes the next oil and gas with stranded assets,”.

So it is hardly surprising to read that Cargill, one of the big three corporations behind America’s massive factory farming system and America’s largest privately-owned corporation in terms of revenue, is now investing in lab-grown meat and protein alternatives. Though a shift away from intensive factory farming is a step in the right direction, it is still concerning that corporations continue to consolidate their control of our food system. It is far better to return our food system to our trusted local agro-ecological farmers by only buying their food.

Now that factory farming is increasingly seen as a massive mistake, and investors are signalling ‘peak meat’, you might ask why planning permissions are still being granted to expand these cruel, polluting and antibiotic-driven systems? The answer is that corporate capitalism/neoliberalism has usurped the power of both national and local democracy.

Despite years of opposition from scientists, environmentalists, conservation officials and local residents objecting to two major pig factories just outside Belfast, with a combined total of over 70,000 pigs, on 19 January, the Antrim and Newtownabbey Council Planning Committee granted permission for an expansion to 150,000 pigs. This is a recording of the council meeting where, at 30 mins 40 secs, you can hear the lawyer for the Calhame Road pig farm applicant JMW Farms, state that “there is no legal reason why you shouldn’t grant planning permission.” The delicately planted idea of a lawsuit from a pig producer with a revenue of £40 million is enough to scare the council from daring to question the sincerity of his promises, so permission was duly granted.

The Calhame Road pig factory planning request was to change the factory’s use from fattening pigs to breeding sows so they could say that there would be no more pigs on site. However, piglets of up to 30 kgs don’t need a permit and nor do the multiple farms where they will be fattened providing they grow less than 2,000 pigs on a farm. So, the reality is that there would be an extra 75,000 pigs going to slaughter from this new factory’s breeding sows alone.

JMW Farms reputation is forever blemished by the 2018 undercover footage revealing horrendous conditions in their subsidiary, Crockway Farms Limited’s, farm in Somerset. The previous year JMW (Jim & Mark Wright) Farms, co-owner Jim Wright, was named pig farmer of the year and the company stressed on it’s website that ‘all animals were regularly monitored and housed in specially designed facilities to ensure their comfort and well-being’!

This 7-minute extract from our 2018 documentary Pig Business in Northern Ireland includes interviews with many of the objectors including neighbours whose lives are affected ‘day in and day out’ by the toxic stench, water contamination and slurry pollution from these two animal factories.

When local campaigners submitted a Freedom of Information request for the slurry management plan for these farms, Antrim and Newtownabbey Council responded by saying that they did not hold information on that matter. Green Party N Ireland leader Clare Bailey MLA expressed her concern; “Clearly, slurry from tens of thousands of pigs must go somewhere and it’s unacceptable that the local council doesn’t know where that mountain of slurry will end up”. She went on to say, “Planning approval for two major pig factories in the Greater Newtownabbey area is an affront to public health and demonstrates failures inherent in the planning system. If you live close to a mega farm you are at risk of exposure to ammonia concentrations that are forty times greater than the average, resulting in headaches, nausea, diarrhoea, cardiovascular disease, respiratory problems, cognitive decline, higher death rates and lower birth rates”.

Despite citizens and investors dislike of factory farming, they continue to grow ever bigger. In Mexico, a company called Grupa Kao has the go-ahead to process 2 million pigs annually at a new facility supplying Asian and American markets. The Grupa Kao company is also a chemical company, automotive part manufacturer and retailer across Mexico. Economies of scale are inevitably going to win the trade competition in their particular section of the market, but when corporations own several sectors, what hope is there for smaller, independent and more sustainable methods of production? To better understand the corporate takeover of food and farming, read How To Fix A Food System That Is Not Designed To Feed People.

“Industrial agriculture wants us to believe that “feeding the world” is a one-size-fits-all problem, requiring increased production to feed a growing population. But as we charge headlong into an uncertain future, truly feeding the world will require uprooting deep-seated institutions of power, and embracing diverse methods of food production that work with local ecosystems, not against them.” And a good example of this is to keep pigs as part of an arable rotation. And Wales is forging ahead in supporting their local small scale family run pig farms.

Max Tailby owner of Jolly Oinks tells us about his rare breed Berkshire pigs, about surviving lockdown and about how more people are becoming interested in his healthy happy outdoor pigs. 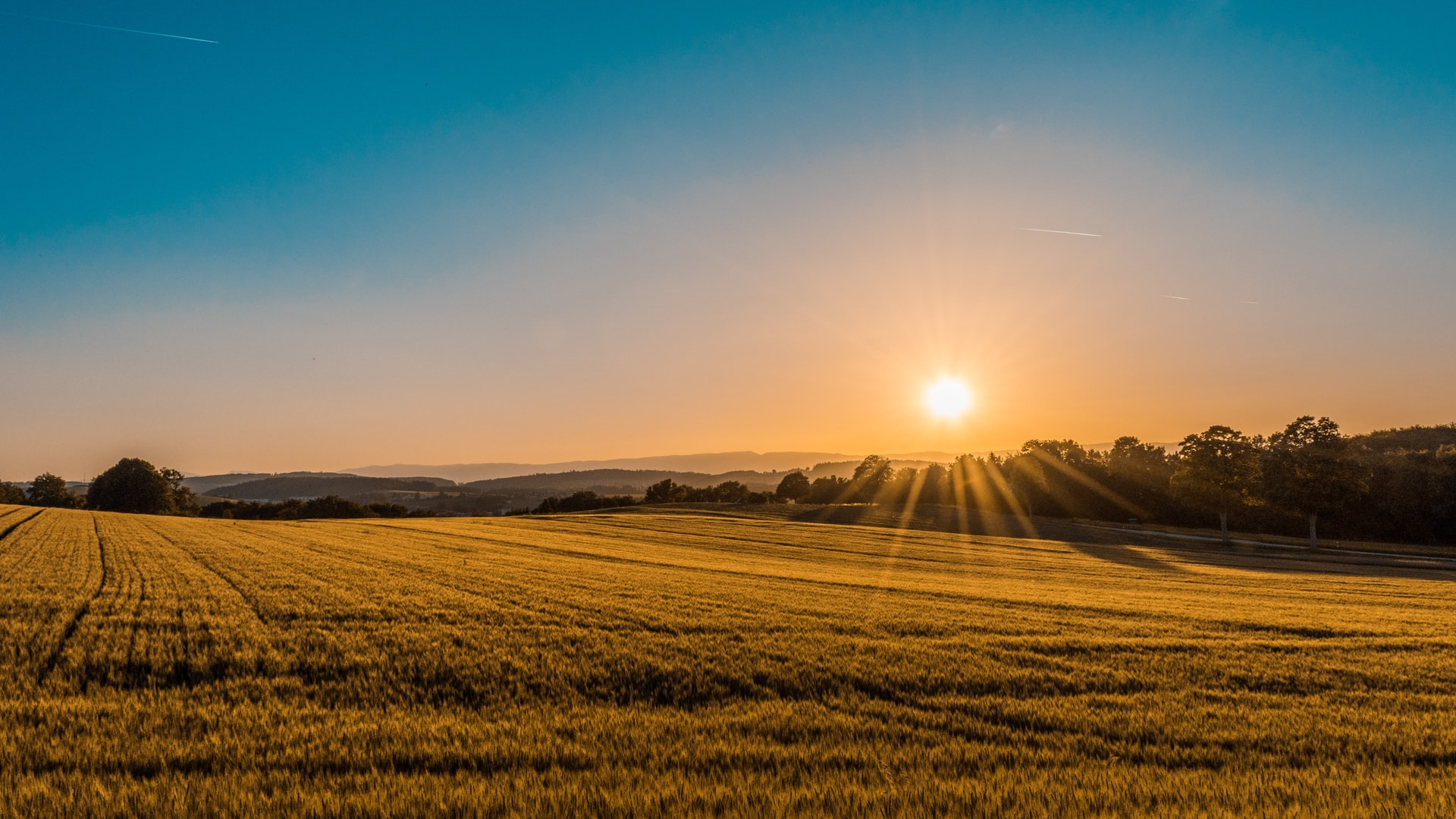