MPs Trade Away Our Values • Farms Not Factories

Last week we reported the devastating news that, despite the pleas of many cross-party MPs, a Tory majority rejected amendments to the Agriculture Bill that are needed to protect UK farmers from global imports produced to lower standards of food safety, animal welfare and environmental protection than those required of UK farmers. Check out this list of MP’s who voted No to this vital addition to the Agriculture Bill. If they are your MP please write to them. We have written this letter as a template. Better still if you add in your words why this bill directly affects you.

MPs that made statements about why they voted against the amendments in the parliamentary debate include, Victoria Prentis1, Dierde Brock2, Owen Paterson3, Daniel Kawczynski4, Robbie Moore5, Nick Fletcher6, Mark Garnier7, Liam Fox8, David Johnstone9, Marcus Fysh10, Julie Marson11 & George Eustice12. Follow this link to the transcriptions. This example letter to David Johnstone MP, Wantage shows how these transcriptions could be used in a response. If you want any help to write a response to your local MP’s statement, let us know.

Cowering to US pressure, Liam Fox, North Somerset MP, threatened “the US would walk if this amendment were to become law in the UK ”

Now to the good news from local small scale high welfare pig farms who report how they are faring under lockdown. Farmer Nina from Crowkeld Rare Breeds, tells us that her local family run abattoir has closed because of the lockdown. However she has fortunately found another and she has actually taken more meat box orders than usual, and is enjoying educating people about their pigs due to a spike in consumer interest.

The pigs at Home Farm Produce live in woodlands, rooting and wallowing. Though being unable to sell at farmers’ markets & events has impacted a large part of their business, many new customers are reaching out to buy directly. 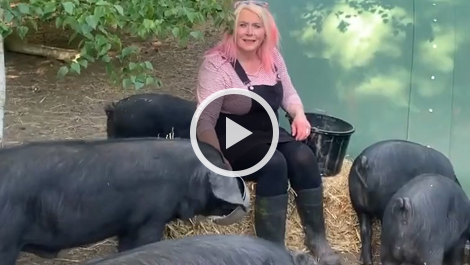 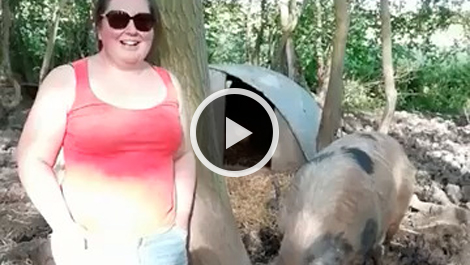 Following the spike of COVID-19 outbreaks at meat packing plants in Germany from lack of PPE and guaranteed sick pay, we learned that as of January 2021, it will be illegal for companies to subcontract employees in these workplaces. This is an amazing move to end exploitative conditions and a move towards protective measures, and thereby a reduced potential for illnesses. This will lessen the chances of packing house closures and the consequent backlog of fattened pigs having to be euthanised as in the US where up to 10 million pigs may have to be euthanised and removed from the food chain by September 2021.

However, improvements in these packing house worker conditions are treating the symptom and not the cause. Such cruel work environments are due to the over-centralisation of meat production and processing. Massive slaughterhouses and processing plants are competing in a global race to the bottom; as standards drop, so the quality of food and environmental pollution is on the rise. ‘Get big or get out’ of the industry is a recipe for poor quality food and food insecurity. For sustainable, resilient food production we need a network of independent small scale slaughterhouses, processors and shops to give farms a choice of markets and thereby the ability to bargain for a fair farm gate price.