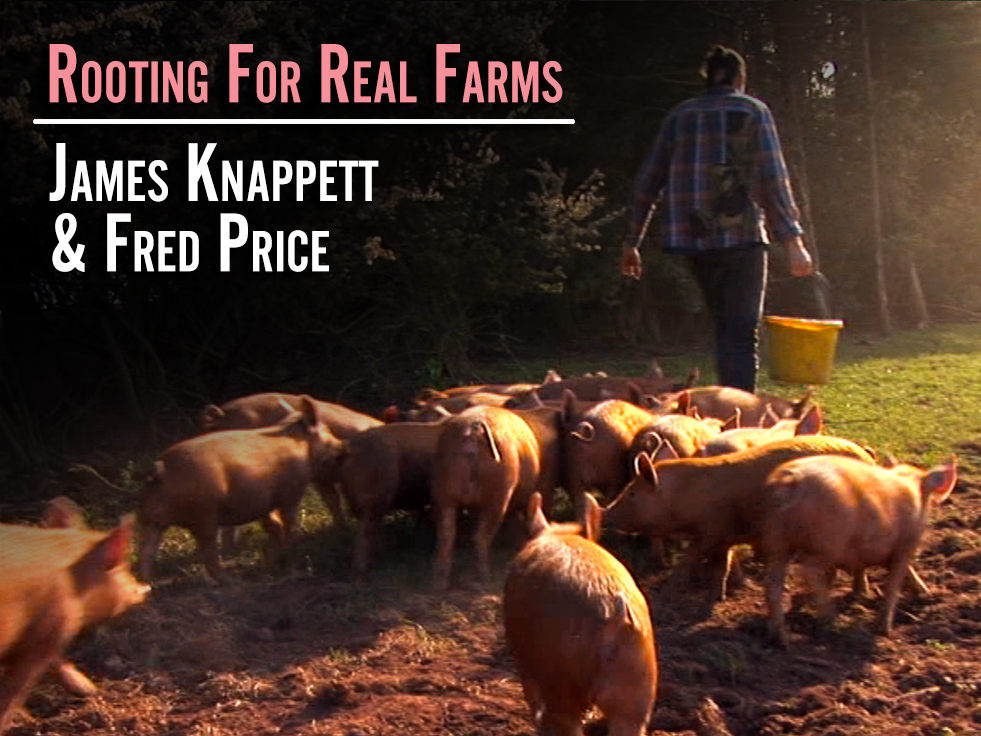 The next film in the celebrity chef series features James Knappett, head chef at Bubbledogs and the Kitchen Table restaurants and his chosen pig farmer, Fred Price whose Tamworth pigs are raised outdoors in pockets of woodland on his farm in Somerset. ‘We raise Tamworths because they are slow growing and they have a ratio of fat to muscle that makes delicious pork dishes. They are the closest relative to the English forest pig so are really hardy and suited to an outside environment.’

James believes that small scale farmers and vegetable growers hold the key to the superior taste and texture he needs to create the inspirational dishes on the menu at the Kitchen Table. Typically there will be a menu of 12 small courses which change daily. Up to 20 guests sit round the kitchen watching James and his team prepare, serve, and talk through a tasting the menu which has a strong focus on British traditions, ingredients, and flavours.

‘Fred’s outdoor pigs’ muscles are naturally worked to develop the flavour that will be enriched by the type of added feed.’

James insists on sourcing from small producers for the quality and trust that is not available in supermarkets’ global, industrialised food system. ‘I’m very lucky that on my street in London I still have the classic greengrocer, fishmonger and butcher. If these guys aren’t supported by businesses and individual customers, they will disappear and we’ll be forced to buy supermarket basics. I personally don’t buy from supermarkets to eat at home or for the restaurant.’ 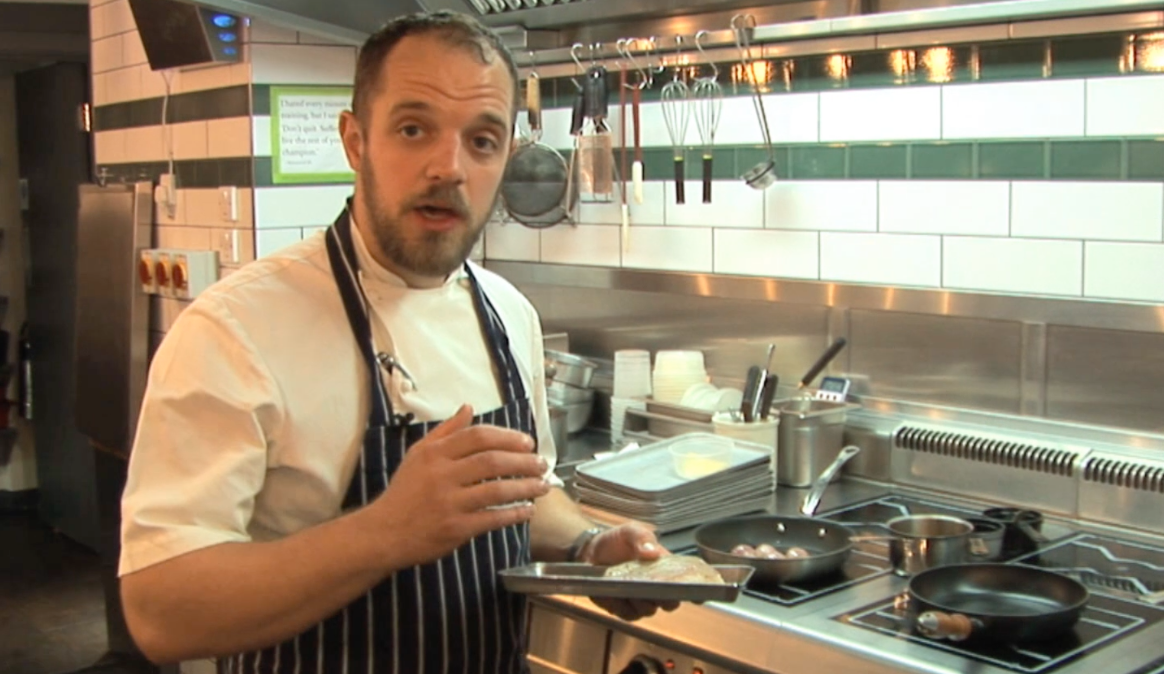 James in his kitchen at Kitchen Table

The pig’s jowl that he was preparing, a cut from behind the cheek, is discarded by most butchers and you would never find it in a supermarket. ‘The flavour is in the fat and Tamworth’s have incredible marbling effect where the fat’s just oozing with juice. The skill of the farmer is in what’s in the pig’s feed, how it’s raised it and a relatively natural environment. I cannot do anything to change that it’s either got it or it hasn’t.’

Fred keeps his Tamworths outdoors where they are healthy and well exercised as they can forage in the woods for roots and grubs; the way their ancestors did for millennia. ‘I think the benefit of having them outside is the diet, all the surrounding greenery and in the winter, they graze on the cover crop. By taking longer to finish ie till slaughter, they are running around building muscle and burning fat. This gives a much better developed carcass than a pig that has been raised indoors in a short space of time.’

Added to the slow-cooked jowl dish were onions caramelised in rendered bacon fat, celeriac fermented in salt for 15 months and to balance the fat, a compote made from acidic early season gooseberries. 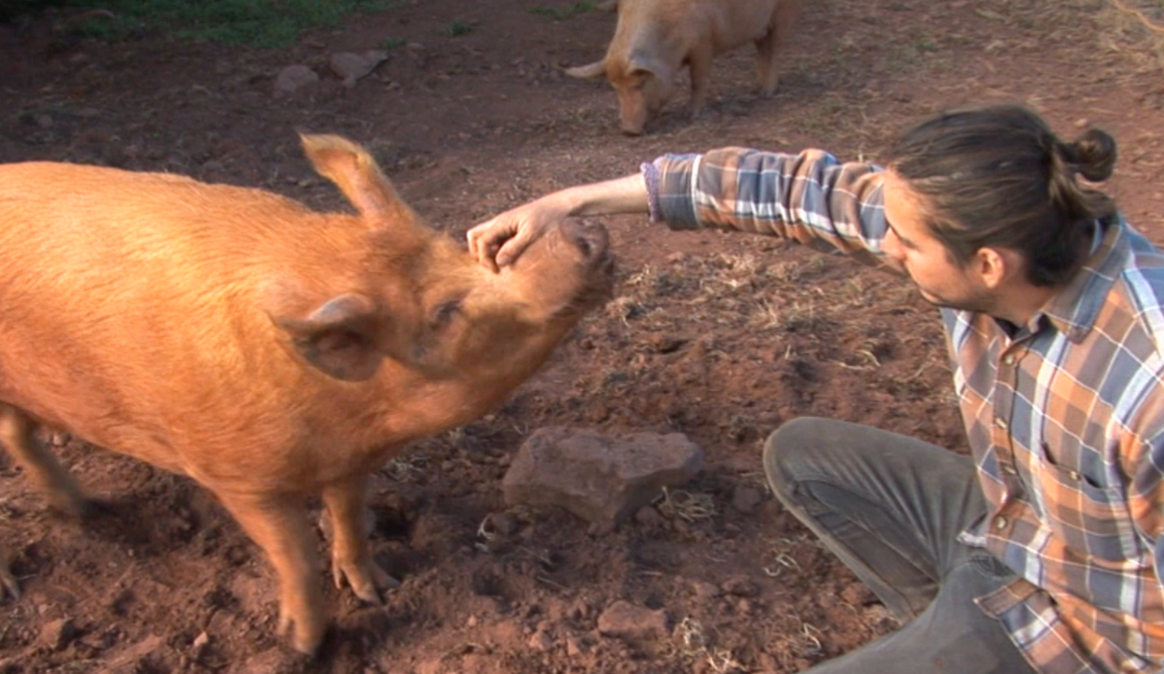 Fred getting to know one of his Tamworths

One of Fred’s Tamworth sows had recently given birth to ten healthy furry brown piglets in a nest she had built in a secluded pocket of woodland. She had sheltered the nest with leaves and branches to protect the piglets from the wind and rain, and lined it with nettles and straw which she brought over from her hut on the other side of the wood. ‘ It was a cold wet night but they were absolutely fine.’

James and Fred both believe that farming should be a life shared with animals, not an industrial process that can only profit if pigs are fed imported feed, raised in overcrowded, barren concrete indoor pens and given routine antibiotics to keep disease at bay. ‘I personally would eat less meat of a higher quality, because it is totally traceable and you know exactly how it has been farmed and who’s farmed it. It is certainly a better and much more enjoyable way of farming.’