Harry Boglione, who supplies his parents’ restaurant Petersham Nurseries with organic meat and vegetables from his farm in Dorset, told us that when he decided to become a farmer his dad thought it was ‘a complete and utter disaster’ but after a couple of years he changed his mind and became a bit envious, wishing he was young enough to start such an amazing enterprise.

Hardly surprising, as everywhere you look on Harry’s farm there are thriving contented animals, nourished fertile soil and rows of flourishing vegetables. We filmed the pigs grazing and rooting on rough pasture, leaving manure to fertilise the soil and helping the grass to seed by digging up clods of earth in their search for roots and grubs.

Because they are active all day, allowed to grow slowly and naturally, and fed on a mixture of vegetable waste, milled organic beans barley and wheat as well as what they graze and dig out of the ground, the meat is richer with a more intense grain and a deeper flavour.

This is what Damian Clisby, head chef at Petersham Nurseries is looking for: “My grandfather lived till he was 96, he cooked with half a pound of lard a day, fried his eggs in inches of lard. Fat in the right amount is good, flavour in the fat really comes through in what the animal is eating, you can really see the tenderness coming through, you can see a bit of marbling in the fat and you know that it’s grown correctly and slowly and it has had time to nurture those muscles and that life and that flavour. We don’t serve factory farmed meat because we don’t want our customers consuming or eating pork that is full of antibiotics, we want those beautiful intelligent creatures looked after and nurtured.’

Damian turning his nose up at factory farmed pork

Harry has never used antibiotics. He doesn’t need them because pigs kept outdoors in the fresh air and sunshine, with plenty of land to forage and graze, very rarely get ill. He says: “They’re incredibly resilient creatures so if you have to give them antibiotics you’re doing something incredibly wrong to their natural function because they have got very strong immune systems. They eat anaerobic, fermented foods that they find naturally in the ground.”

He keeps his pigs well by making sure they get the minerals and nutrients they need to keep their immune systems working. He gives them seaweed which is rich in minerals and vitamins, and allows nettles, thistles and dandelions, all rich in immune-boosting vitamins, to grow in the fields: “They’ve got all of this open space to find and pick up minerals by eating a bit of mud and there is a bit of a wild flower meadow going on which they kind of created themselves by rooting up and then when the ground rests all those plants come back. I genuinely believe that all livestock are able to self-medicate given the diversity of feed.”

Harry reckons the chefs like his meat because it makes their lives easier in the sense that the taste is already there:“They can just cook it up and it tastes nice. Whereas if you go for your pink commercial pig, they’ve got very little fat on them and they’re all muscle so it’s quite hard to keep that meat nice and tender. Also I work with a lot for chefs that are very much into the sustainability and the regionality of what they’re sourcing so that helps as well.” 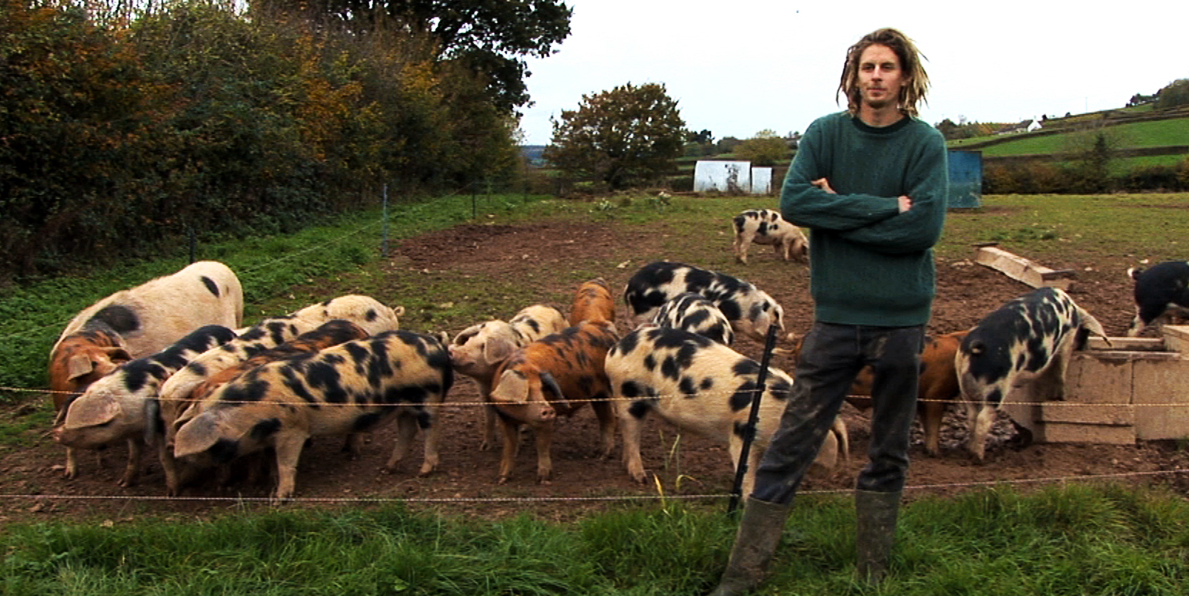 Harry with his pigs

He and Damian agree that a lot of people are eating too much meat, and that this culture should change for the good of peoples’ health, for animals confined in unhealthy and inhumane animal factories, and for the ability of the planet to grow enough food to feed everyone properly. Harry says: “Look at the Italian cuisine, meat is an accompaniment to a plate of vegetables. It’s not a bit of meat with a few veg around it. So if chefs can learn to cherish their meat as opposed to putting it in as the centrepiece, because it’s quite easy to cook a nice steak and put a few carrots next to a few beans, but it’s not so easy to make an incredible veg dish with a bit of steak threaded up through it.”

He makes sure there’s no soya in the pig feed because most of the soya fed to pigs in Europe is genetically modified and grown on cleared Rainforest and Cerrado habitats in S America: “It’s incredibly unsustainable. Soya production is probably the worst thing that has ever happened to this planet. We are bulldozing entire stretches of pristine rainforest just to grow this crop that we’re dousing in Roundup, and other chemicals produced by companies such as Monsanto, and that’s what we are feeding to our pigs and that is what we are eating.”

“So it’s not only cruel and horrible, it’s also not healthy and it’s not sustainable.  So I know there is always the cost argument but eat more vegetables and eat less meat and get good meat.”

Watch our film with Damian and Harry here.