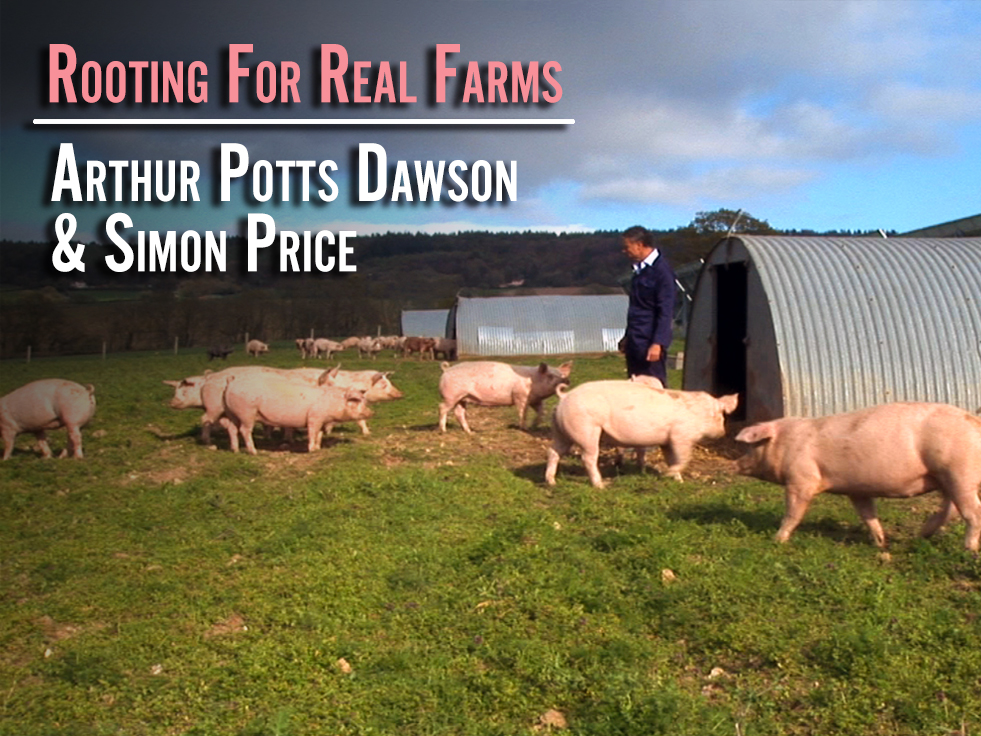 There is a good story behind everything on the shelves of the Peoples’ Supermarket in Holborn, a non-profit food co-operative which Arthur Potts Dawson and others started 8 years ago. Now it has many thousands of members who are also customers and are involved in sourcing decisions. ‘All the items on the shelves have been chosen by the members, it’s all about raising awareness of quality, ethics and fairly priced food.’

Members pay an annual fee of £25 and, in return for a 20% discount, are asked to volunteer for 4 hours each month either in the store or café.

‘Everything on our shelves here, is from somewhere I’ve visited. Whether its Yeo Valley dairy, or Devon Rose pork, we have been there. Once you begin to drill down into the ethics of dairy and meat and especially pork, you enter a world where the trustworthiness of the supply chain is vital. The producer, the supplier, is the person we focus on.’

Arthur being filmed at The People’s Supermarket

One of the farmers that supplies the People’s Supermarket is Simon Price who keeps Landrace pigs crossed with Hampshire and some Red Duroc in Devon. ‘These are the breeds that are best suited for an outdoor, extensive system. I think the message to the consumer is when you go into the supermarket or a restaurant, ask where your pork has come from or look on the package. Instead of just grabbing the first packet of bacon you find, have a good look to see where the pork comes from and how it has been produced.’

To tackle the issue of waste in the store, Arthur then set up the People’s Kitchen at the rear of the store to create ready meals to buy and eat at home. All the ingredients come from items that have reached their sell-by date or are past their best. The demand for The People’s Kitchen products is so high that it sells out on a daily basis with on average 100 kgs of waste per week processed through the kitchen.

‘My constantly looking at sustainability goes back to when I was sixteen and Albert Roux was telling me, turn off the tap, don’t throw away food, sweep the floor, only turn on lights and the energy when you need it, and this was all about the economy. But the economy of the kitchen is based on the ecology of the kitchen, they’re completely related, economy and ecology.’

Simon with his pigs

Arthur believes cities are inherently unsustainable unless they source locally as they did before mechanised transport when all the food was brought by horse and cart into the city from the surrounding farmland. ‘The vast volume of food that comes into a city cannot exist without the rural population creating the food. We can’t turn our backs on our local UK producers by saying oh I want it cheap, cheap, cheap from other countries because it puts them out of business,’

Pork imported from abroad has been raised in unhealthy factory farms where animals are routinely given antibiotics to compensate for the overcrowded, barren conditions. Contrast this with the life of Simon’s pigs running, rooting and playing in the spacious grassy fields, producing a perfect balance of fat and lean meat. ‘We don’t want factory farmed pork from other countries in Europe coming into this country ideally, but we do want people to just be a bit more discerning when they go shopping and just have a look and turn their noses at foreign, imported, factory farmed pork.’