Will Devlin, holder of a Green Michelin Star for his exceptional commitment to sustainability, runs The Small Holding restaurant in Kent. There is no formal menu, instead dishes are created from seasonal ingredients produced at the on-site farm, from local suppliers or foraged locally. The pork is sourced locally from Tom Cunningham, who runs The Pure Meat Company. Tom keeps rare-breed Tamworth pigs that graze, root and forage outdoors, producing top quality, slowly raised meat. Will & Tom are both #RootingForRealFarms by supporting local high welfare farmers, suppliers and producers.

Chef Will Devlin runs the Small Holding restaurant in Kilndown, Kent, which has been awarded, among others, a Green Michelin Star for its sustainability. Will started off as a qualified mechanic for four years before realising cooking was where his heart was really at so he went to start a culinary career at The Marriott Tudor Park Hotel with Jo Mackay. After 18 months he moved to London to work under Gordon Ramsay at Petrus. Will then returned to Kent and joined the Richard Phillips Company at Thackeray’s under Dan Hatton and was offered the opportunity for his first Head Chef position at The Windmill, before ending up with his own farm to fork restaurant – The Small Holding.

The Restaurant sources food from its own veg garden, hen coop, a nearby flock of sheep and from foraging trips to nearby woods. The menu changes every day, using home-reared and home-grown ingredients from the garden farm, which is less than 10 ft from the kitchen and produces vegetables, fruit and herbs including the mustard greens that Will used for a pear, cider and green mustard sauce that he poured onto the pork chop he cooked for us on the BBQ next to the veg beds. Chickens and ducks roam in the grass paddock just below the house, and sheep for hogget and mutton dishes graze permanent pasture fields less than half a mile away.

There is no formal menu at The Small Holding. Instead, guests are offered dishes from ingredients produced that day from the farm and from local suppliers, or foraged from the neighbouring woods and hedgerows. Vegetables and fruits from the farm are harvested only hours before guests arrive, and served with dishes of homemade charcuterie and zero waste fresh meat which, apart from the pork, is sourced from the farm’s own livestock.

Drinks include fruit and veg juices (made from local trees and shrubs), wines, beers and kombucha. A meal might start with home-made kombucha or broth with home-made sourdough bread and fresh butter made on site with the rich yellow cream from a local herd of pedigree Guernsey and Holstein Friesian cows in nearby Benenden. The pork comes from Tom Cunningham’s The Pure Meat Company across the county border in Kent where he rears rare-breed Tamworth pigs, more of that below.

Meals are prepared according to themes such as ‘The Farm’ with raw peas, elderflower and radishes, ‘The Glut’ with Kohlrabi, green apple and yarrow, ‘Preserves’ of fermented roots and smoked bacon broth, ‘Cured’ with homemade fennel salami and sourdough, ‘Fish’ with oyster, chive and pickle or crab, chamomile and fennel and ‘Sweet’ with gooseberry, honey or carrot, cream cheese and hogweed.

“Growing our own produce on the farm brings an understanding and honesty back to the kitchen, and vital freshness. Making the most of our harvests when the ingredients are at their prime – whilst also preserving and conserving them to use throughout the year, keeps us concentrated on the natural cycle of the land and helps us to create full flavoured and imaginative dishes.” Will Devlin

“A group of folk growing amazing things, then pulling them out of the ground, sometimes knobbly and lumpy, then cooking and serving them. It’s perfectly imperfect and I wouldn’t change a thing.” Grace Dent, The Guardian “

The Pure Meat Company is a 300-acre farm in the Kent Weald run by brothers Tom and Sam Cunningham with the clear objective to tread more lightly on the planet. Tom and Sam farm ethically and sustainably with free-range, native breed cows, pigs and sheep that graze, root and forage, producing top quality slow-raised meat, reared gently and sustainably in the heart of Kent.

The farmland is made up of permanent pasture, 100 acres of wildflower meadows, most of which have never been ploughed, and ancient woodlands. The permanent pasture is grazed by Romney sheep and English Longhorn cattle. The dense hedgerows and woodland are home to a herd of rare-breed Tamworth pigs.

In the video Tom tells us about the wonderful mothering abilities of his Tamworth sows, and how the late-weaned piglets, slow grown outdoors, healthy and well exercised, produce a marvellous-tasting, textured meat with generous amounts of fat that is both marbled through the meat and deeply layered on the outside, with a flavour that reflects the varied diet of roots, grubs and legumes that the well-nourished soil provides.

Tom says, “We farm ethically and sustainably at The Pure Meat Company, in complete harmony with nature. We raise native breeds that are suited to our farmland, farming regeneratively, enhancing our soils, supporting our pollinators, and ensuring the wildlife flourishes alongside our native breeds to create a system with absolute integrity. We are striving to produce meat with unrivalled quality that tastes sensational. We have total control over every stage of producing our meat, from beginning to end. It’s this thoughtful and intentional approach which produces incredibly special and very honest meat – just as nature intended.” 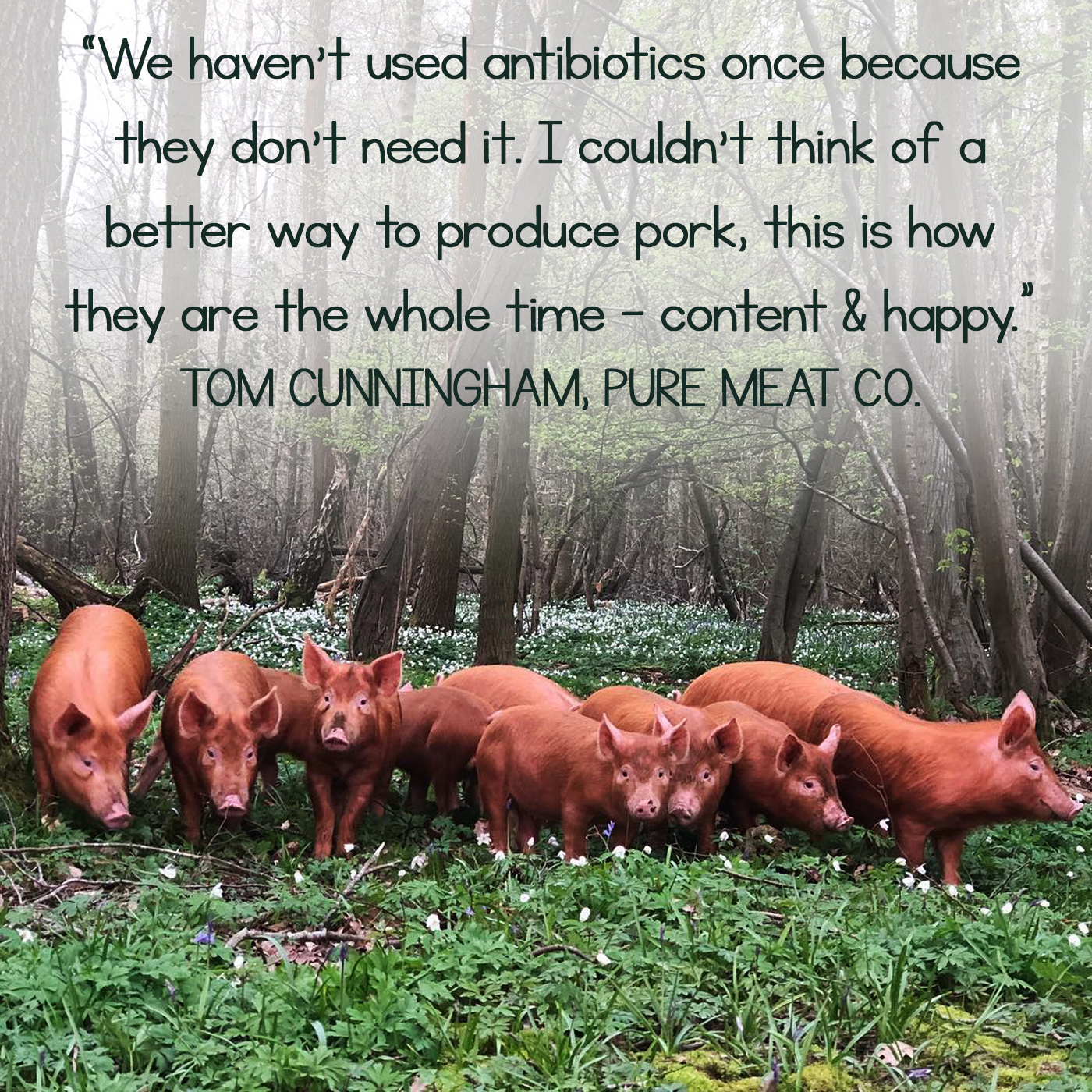 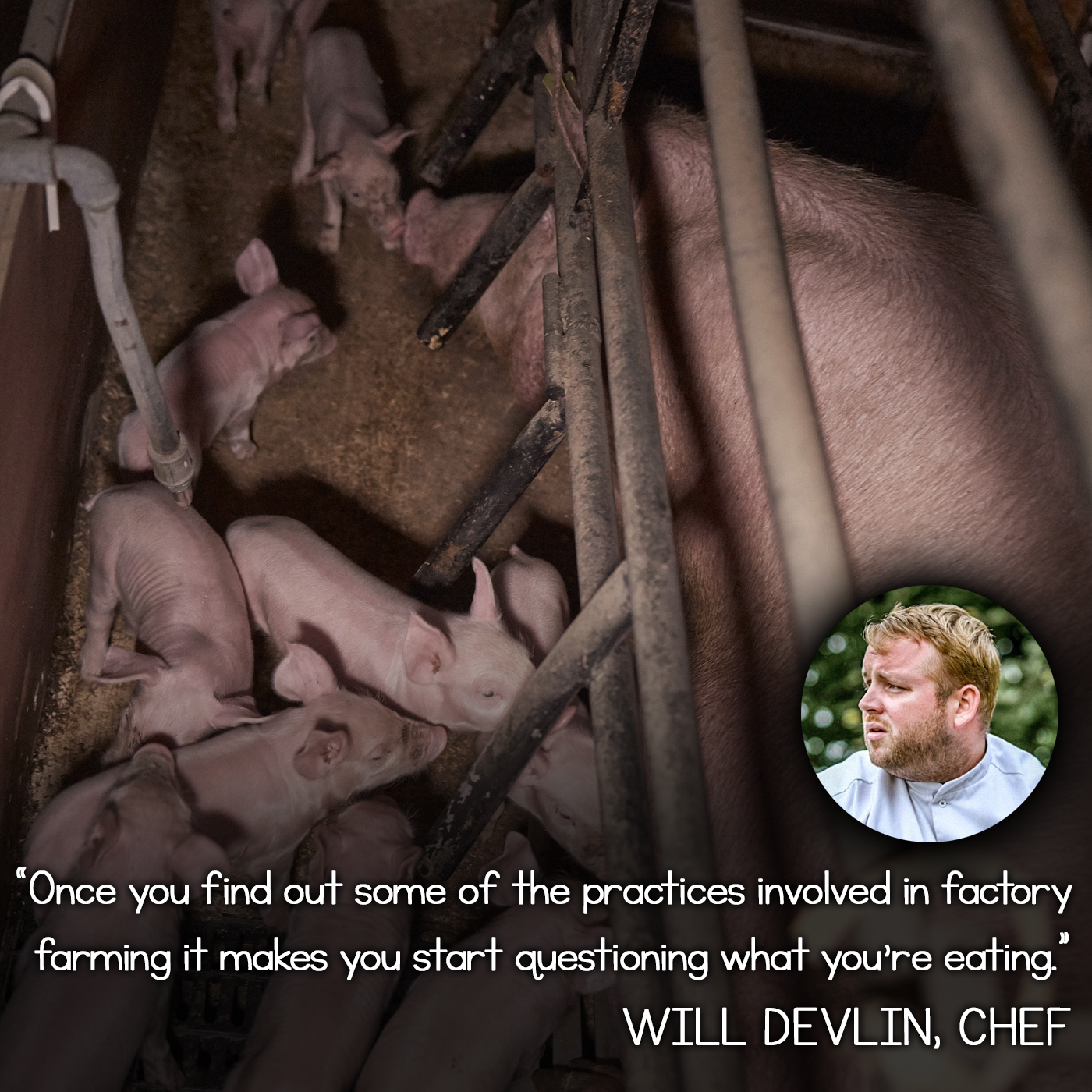