Liz Earle MBE, founding farming member of Pasture for Life and an ambassador for Love British Food says, “There’s so much access to information, there’s no excuse for us not to be conscious of what we’re buying and eating.” In this short video, she cooks pork belly sourced from Rob Simonds’ herd of Large Black pigs in Norfolk. Rob says: “Our rare breed pigs are very fit and healthy so there’s absolutely no antibiotics used in their production and they live a happy healthy life.” Help support our local, high welfare farmers like Rob by giving this video a like and a share:

Liz Earle is a writer, TV presenter and entrepreneur. She started her career as a beauty writer for Woman’s Journal which led to her writing her first book Vital Oils, a guide to the therapeutic properties of exotic oils such as peach nut and passionflower and the health and beauty benefits of using them regularly.

This was followed by more than 35 books, an MBE, and a stellar career in TV which included a show Liz Earle’s Lifestyle featuring guests like Gordon Ramsay and Ken Hom.

In May 2017 The Good Menopause Guide went straight to the number one spot on Amazon on the same day it was published.

Then the following year her TV mini-series about living well, filmed on locations in Italy and Greece, was broadcast on ITV This Morning.

Her focus has always been healthy, sustainable living and eating. For many years she had a farm in the West Country with a herd of pedigree Hereford cattle producing pasture-fed organic beef. Because she was in daily contact with animals that end up on our plates, as she explains on our film, her belief is that animals raised for food must have the best quality of life that we can possibly give them.

Always look for high animal welfare labels. You should be able to see those in the butchers, you should look for things like Organic, Free Range, RSPCA Assured, there are lots out there but it has really got to be focused on the animal welfare.

As well supporting Farms Not Factories, Liz Earle is an ambassador and advocate for The Soil Association, The Sustainable Food Trust and Compassion in World Farming.

I think we don’t need to be eating meat every day, I don’t know how that suddenly crept in to our foodie vocabulary. Good quality food is something that we need to treasure and appreciate its value and I think we do that through respecting animals more, having higher animal welfare and also using cheaper cuts of meat.

For our filming Liz cooked a piece of deliciously marbled and textured pork belly from Rob Simond’s herd of rare breed Large Black pedigree pigs in Norfolk. Rob’s company Scotts Field Pork is a family affair, his wife Sarah and children Georgie and Paddy are all involved in looking after the pigs as well as their flock of Romney Sheep and Dexter cattle.

The pigs are free range, born and living outside with plenty of space to root and play in spacious fields.

Performance of these sows is much much less than commercial pigs and we have to grow them very very slowly so ultimately we get a fantastic product. The texture and flavour of the pork is absolutely fantastic and we know that the pigs have had a great life and we also have done our bit to try and support rare breed farm livestock, which if you don’t find a commercial outlet for, will cease to exist, they will just become zoo animals.

Rob is a fourth generation pig farmer whose grandmother recalls a childhood memory of her father who kept Large Blacks in his orchard next to the Manor House where the family lived,

My father was finding it hard to pay for our education so he grew apples and had a herd of pedigree black pigs which were a great success. We once brought up an orphan pig called Billykins in the house. He helped Shorter, our handyman-cum-chaffeur wait at table, we could hear them both coming down the corridor when we rang the bell.

Although buying local rare breed pork does cost more, Rob is adamant that its worth the extra cost on many levels- the hugely better taste and texture, the preservation of rare breeds, the fact that the purchase price stays in the local economy and the peace of mind that comes from knowing that the meat you are eating has come from a pig that has lived a life worth living.

They are very very fit and healthy, so there’s absolutely no antibiotics used in their production. And running around helps their muscle development and they are good healthy pigs. We are very proud of them. 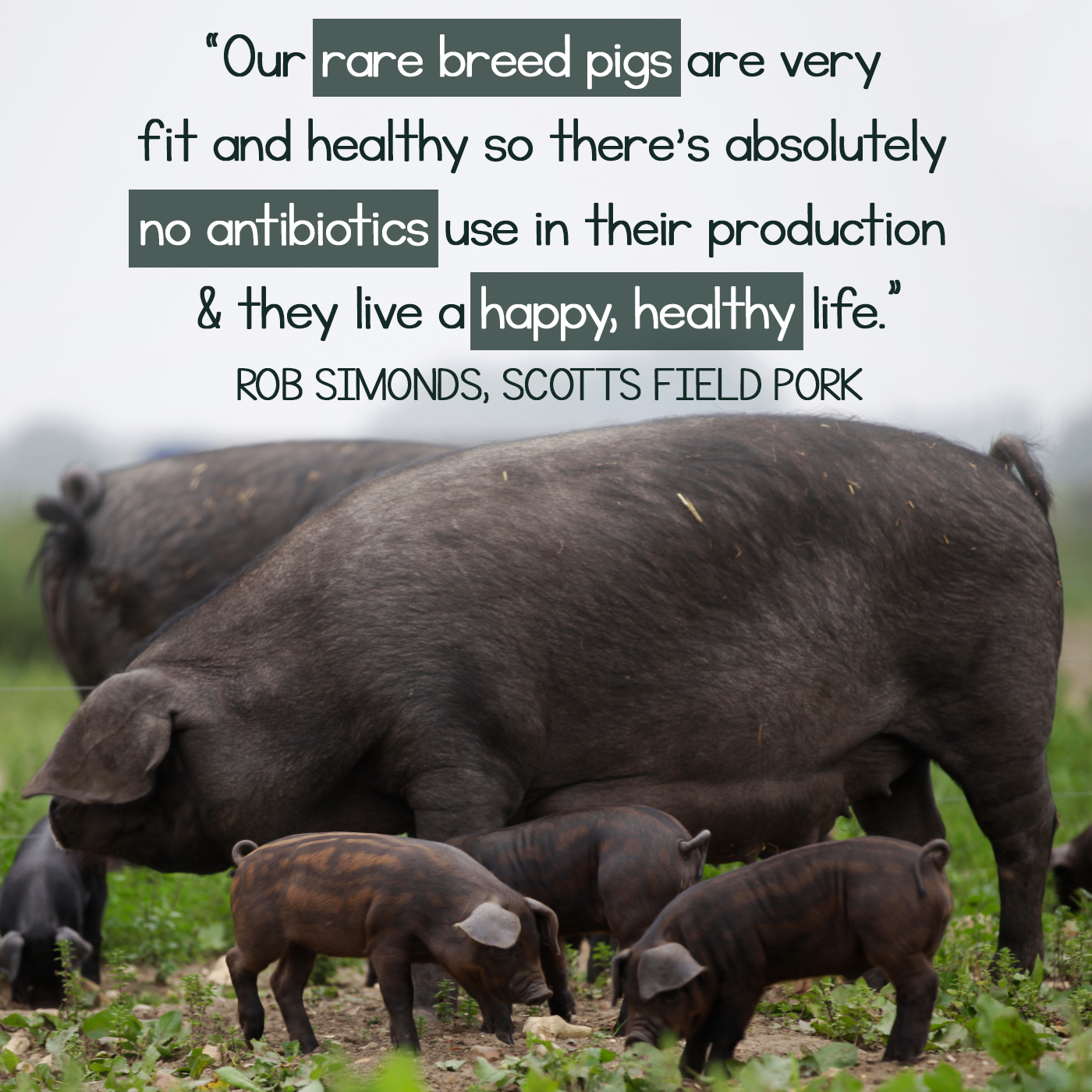