Cyrus Todiwala OBE, celebrity TV chef and proprietor of Cafe Spice Namaste, stars in the second episode of our new ‘Rooting for Real Farms’ video series. In these videos, top chefs team up with high welfare farmers like Giles Eustice from Trevaskis farm in Cornwall, urging people to end factory farming by using the power of their purse to only buy from local, high welfare farms.

Cyrus originally trained as a chef with Taj Hotels in India, and became Executive Chef for the group’s two hotels in Goa. In 1991 he moved to Australia and then shortly afterwards he was invited to the UK with his wife Pervin and young family to run an Indian restaurant called Namaste which was in need of a guiding hand to raise the bar in both food and service.

When the restaurant failed, Cyrus and Pervin took it over. However with no credit record in the UK, the banks refused to lend them any money. Turning to family and friends to raise multiple small loans to start the restaurant, they had a lucky break when they won a car in a competition and sold it to raise the deposit for a home in London.

At this point the Home Office started to threaten Cyrus with deportation because he was in the UK on a business visa but without adequate financial backing. However at that point Michael Gottlieb, the founder and owner of Smolensky’s restaurants in London, offered to partner with Cyrus and Café Spice Namasté opened on the ground floor of an old courthouse in the Aldgate area a stones throw from the original Namasté.

The Home Office continued to pursue Cyrus for deportation until 2000 when, as a result of Cyrus’ numerous charitable roles and his elevation to fame as a TV personality, he was awarded an MBE for services to the restaurant and catering industry.

Cafe Spice Namaste has held a coveted Michelin BIB Gourmand for good quality, good value cooking since 1998, and Cyrus and Pervin were among the first restaurant-owners in the UK to source only high welfare meat from rare British breeds and to prioritise environmental sustainability in the running of the restaurant. Cyrus told us;

I am very proud to say that we are, actually, voted Britain’s most ethical sourcing restaurant, and that comes from the fact that we befriend our farmers. They work very closely with us. They are our friends, they are our mentors, and they give me immense knowledge and happiness, because that’s where most of my knowledge comes from – from the man who is on the soil itself.

We demand good welfare – we should demand the best. If that animal was in any single way or form mistreated, we would not touch it. Because it would not deliver the product I want.

In this episode he cooks a pork collar, a less-used but delicious cut with plenty of tasty fat that produces marvelous crackling.

People don’t realise that the collar is such a beautiful piece of meat because it’s got muscle, but it’s got a beautiful chunk of meat and a lovely layering of fat in between which keeps it moist and juicy. I’ll just cut in from the side, there you go it gives you a right example of what I’m talking about. Look at the marbling inside. Now that will not come from a mass-produced animal.

Covid and lockdown had a devastating impact on Cyrus’ and Pervin’s business ventures. His restaurant Mr Todiwala’s Kitchen in Canary Wharf has closed, followed by the branch at Heathrow Terminal 5, both temporarily it is hoped.

Then, in January 2021 Cafe Spice Namaste closed because of lockdown, and at the same time, the lease expired and the new landlord wanted to develop the courthouse, so Cyrus and Pervin re-located to the Docklands. After spending several months serving dosas from a stall on the docks at Royal Albert Wharf they secured almost £50k crowdfunding from loyal customers and re-opened Cafe Spice Namaste overlooking the waters of Royal Albert Dock.

Cyrus wrote, ‘After 25 years, the time has come to bid goodbye to our beloved Grade II-listed former magistrates court in Prescot Street. It has been and will be a very difficult time for us, but there is hope too. Our anniversary falls on the Festival of Diwali where light overcomes darkness and brings hope over gloom.

‘Café Spice Namasté will be part of an exciting space that in time will include an academy and yes, a reimagined version of your favourite Indian restaurant.

‘We always had a splash of colour and I think that will come here too. This space is a lot more modern, with big windows, so it will feel different, but we want to bring back as much of the feel of the original Cafe Spice Namaste as we can. The food is a variety of Indian cuisine, not stuck to any one region or area, though we do have an emphasis on my own style of cooking which is Parsee and we do a lot of Goan food because of my background working there for several years. We try to bring in as much of the sub-continent as possible. At the new restaurant, the classics that our regulars will be familiar with will remain – the rest will evolve.’

Cyrus and Pervin’s many diverse teaching and charity activities continue to bring skills and knowledge to aspiring chefs through a number of initiatives. The Khaadraas Supper Club which has been celebrating Asian cuisine with special events since 2017, will celebrate the 2022 Lunar New Year of the Water Tiger with a special 4-course Indo-Chinese feast inspired by Hakka and Fujian cuisines.

Cyrus’ cooking tutorials, Cook Along with Cyrus, continue to flourish, where people learn to prepare and cook some of Cyrus’ recipes through zoom demonstrations. The latest, Winter Warmers Cook-Along, showed people how to make spinach fritters and tomato soup ‘with a Todiwala twist’, presented in a family-friendly way for all ages.

Zest Quest Asia, a culinary competition that Cyrus and Pervin started in 2014, returns next month after a two year covid-related gap. It aims to raise the profile of Asian cooking and to inspire young trainee chefs to use and develop Asian recipes.

‘We are developing a pipeline of young, home-grown cooks who truly understand and have the ability to prepare food in an authentic asian style. They are the future of our industry.’

In June 2020 Cyrus was appointed Group Chef Ambassador for The Clink Charity.
which runs training projects for prisoners who work up to 40 hours a week towards City and Guilds Qualifications in catering and horticulture. Previously he was chef ambassador to The Clink Restaurant at HMP Brixton where prisoners prepare meals for delivery by Clink graduates who have been released, to customers within 20 miles of the prison.

Besides being Chef Ambassador for the Rare Breeds Survival Trust, Cyrus is Patron of the British Lop Pig Society that oversees the pedigree of this heritage pig breed. The sows are excellent mothers and foragers and produce very high quality, full-flavoured meat with a good balance of fat and famously succulent crackling so the breed is gaining in popularity with breeders.

One of the foremost breeders of the British Lop and producer of Cyrus’ pork is Giles Eustice, brother of George Eustice, Secretary of State for DEFRA (Department of Environment Food and Rural Affairs), whose ancestors have been farming in Cornwall for 400 years. Giles is chairman of the British Lop Pig Society and raises a herd at Trevaskis Farm which produces high welfare, fairly traded, ecological, artisan products which are also more affordable because of the short supply-line.

Eustice is determined to preserve the British Lop by making the breed a household name and encouraging restaurants to source the excellent pork. At present the breed, which has less than 200 breeding females worldwide, is on the Rare Breeds Survival Trust endangered list, and to increase the numbers Giles hopes, with Cyrus’ help, to bring the British Lop to the London food scene and make it a household name.

The sows look after their young to a good long age, being able to forage outside picking up nutrients naturally makes for a pork that is perfect, it simply eats like butter.

It has all of that intra-muscular fat and you know it is a different product to a commercial pork all round and its through the breeding, the history of the animal but also the out-door rearing process as well.

Giles is also a Slow Food producer which means eating less and better meat, paying a fair price to the farmers and always considering the origin to support our invaluable but rare small-scale producers.

About factory farming he says,

I spend a lot of time with these animals and you know the pig is a very intelligent species and it is quite trainable and to think of that being cooped up in a cage just for pure production purposes leaves a huge amount to be desired, and we need to do everything we can to try and stop that process.

For too long people have had the wool pulled over their eyes, and lots of smoke and mirrors, and they have seen through that and they are starting to see through that more and more, that they aren’t’ actually aware of where that meat is coming from in the first place. So there is a definite drive for people shopping more authentically.

Both Cyrus and Giles are passionate about food, farming heritage breeds and the best animal welfare possible and live in hope and confidence that more and more people will be inspired to only buy from producers like Giles and chefs like Cyrus and form a closer connection to the farmers that grow their food. 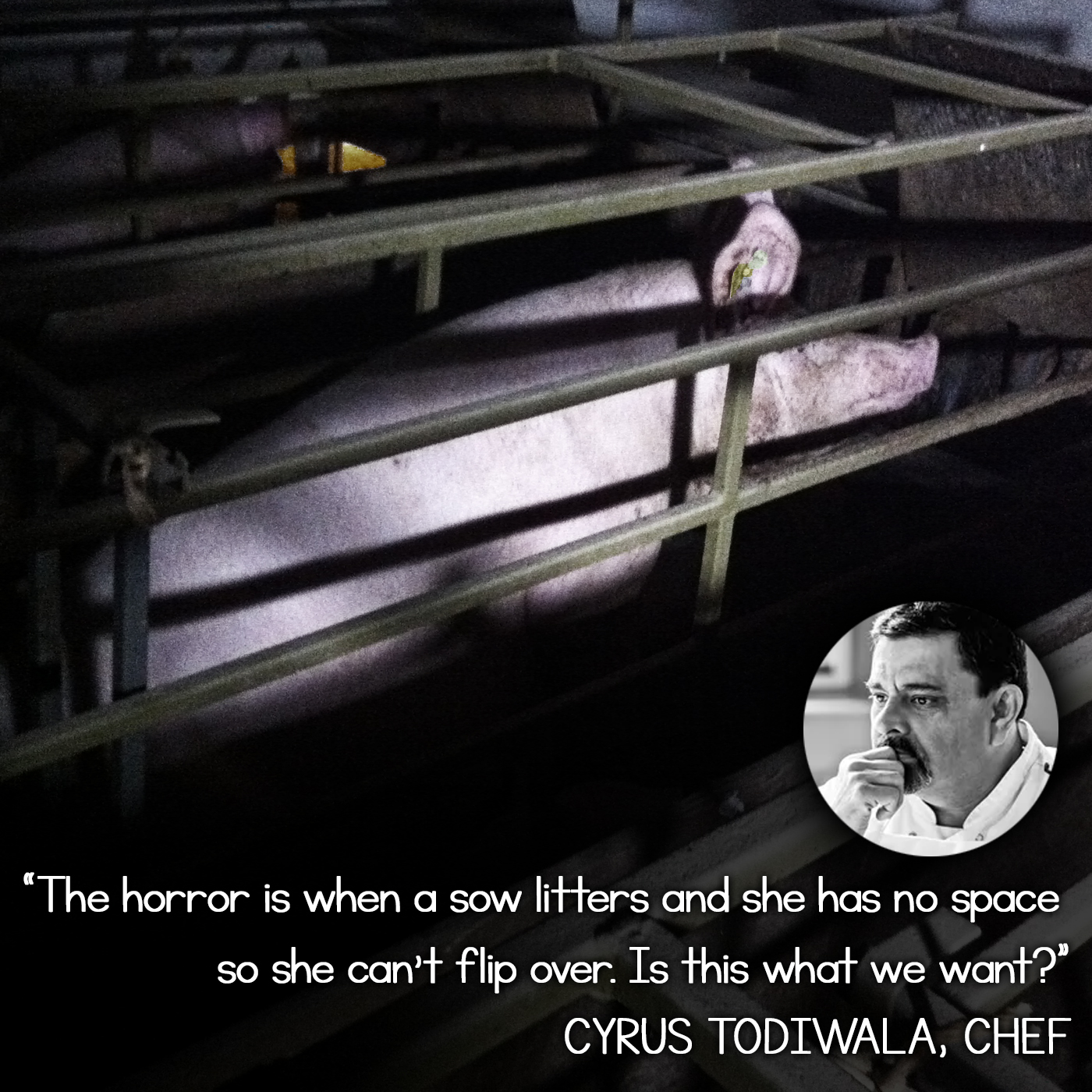 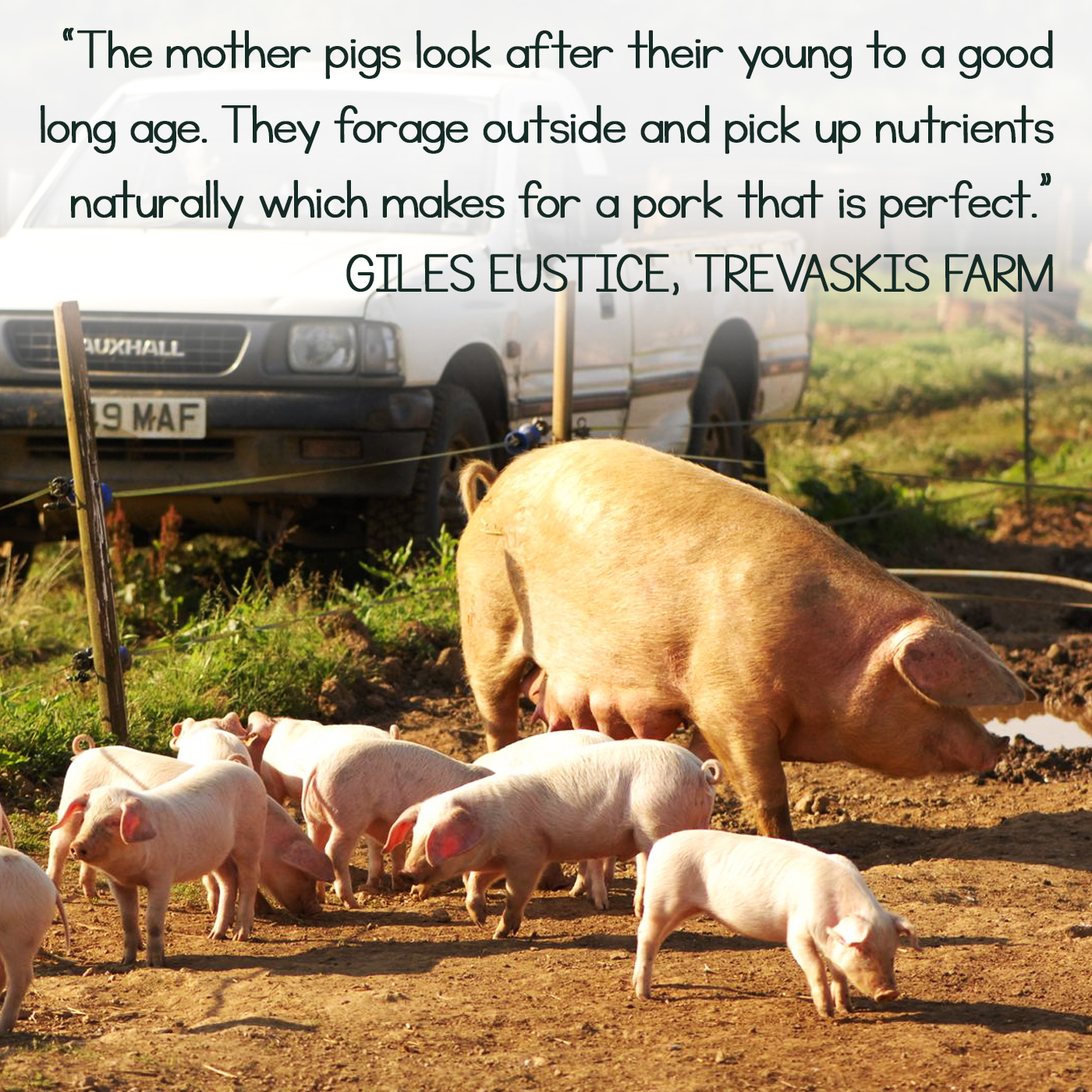 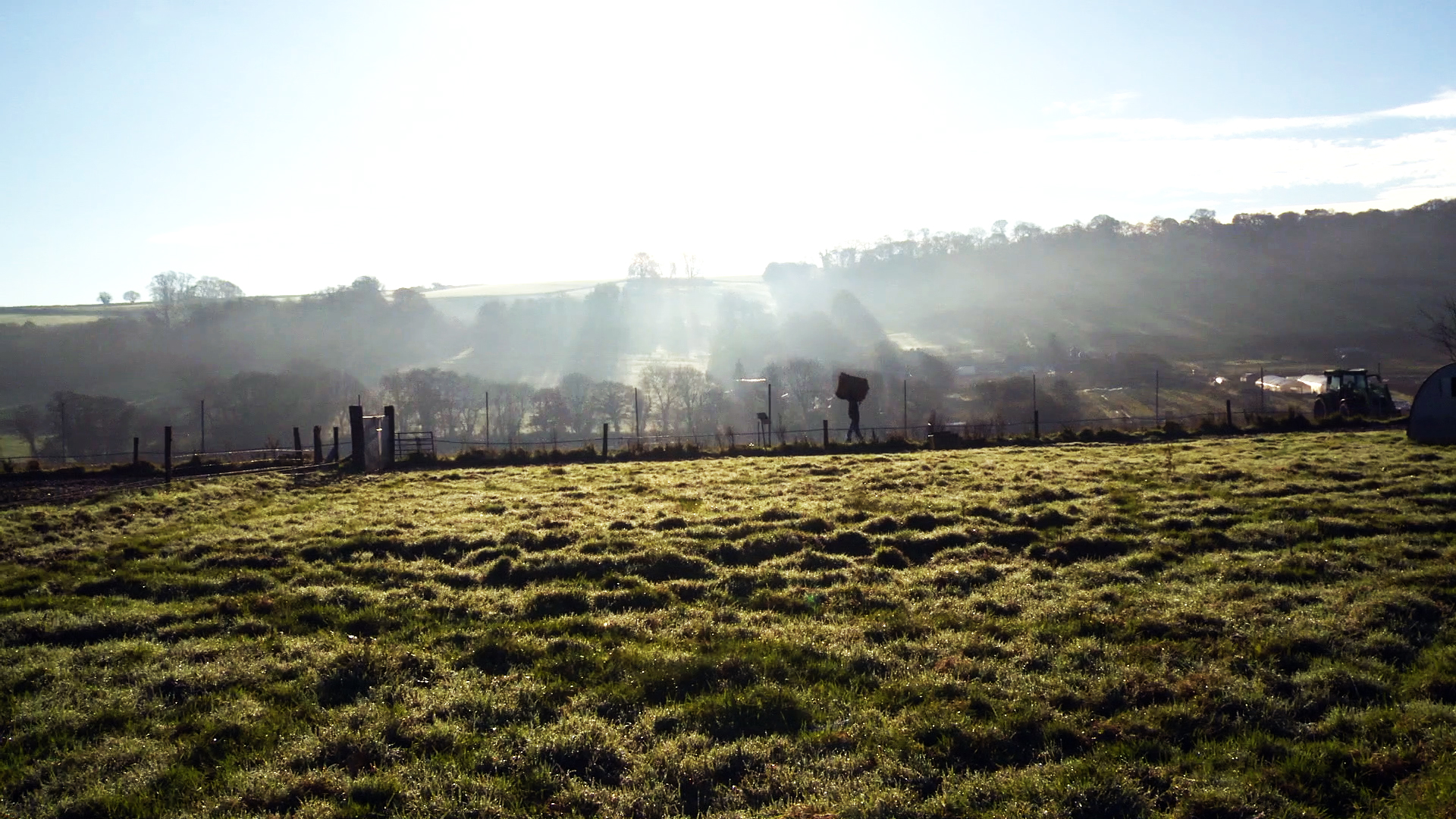