On the outskirts of Delhi, hundreds of thousands of farmers have been blocking many of the main arteries into the city for nearly two weeks. They are protesting against new agricultural laws that will deregulate the sale of crops and remove government subsidies, allowing private buyers to force prices below the cost of production for small farmers. The farmers say the reforms to laws that have long protected small landholders’ place in the market, will put them at risk of losing their businesses and land to big corporations. Prime Minister Modi’s neoliberal agenda that seeks to privatise and liberalise the economy (sound familiar?) is coming under fierce fire from protesters, who, without the minimum price they have been able to rely on in the past, are fighting for their livelihoods.

Modi’s free market agenda follows a similar narrative to 1994 Britain with the abolition of the Milk Marketing Board (MMB), the last of the commodity marketing boards set up in post-war Britain to maintain sufficient levels of agricultural production through a system of guaranteed prices. The government subsidised shortfalls between market prices and the income requirement of farmers. The MMB was about giving farmers a secure income for their perishable product, taking the uncertainty out of the market and allowing farmers to plan. This was vital – a cow cannot be switched off when your milk buyer changes their mind (remember the scenes of farmers pouring milk down the drain in lockdown?) Then, with no MMB to counterbalance supermarket buying power and help with dairy farm resilience, the milk price dropped, at one point by as much as 40% in 18 months, putting thousands of dairy farmers out of business. The personal cost in many cases was depression and even suicide.

Both Indian and UK small and medium scale farmers fear being made bankrupt by being deprived of subsidies that are essential to cover their cost of production. In the UK, Secretary of State for DEFRA George Eustice claims that in the event of a no-deal Brexit, UK farmers will be protected by ‘export substitution’ (BBC Farming today; 1st Dec, 3m 40s – 4m 40s). He explains, “We produce more of the food domestically than we currently import. The UK is the third largest importer of food in the world, measured by value, after only China and Japan, and therefore we do have the option to ensure that we can support our agriculture sector to build up production capacity and to produce food that is currently imported from other countries”. Hurrah, with Britain importing 40% of its food, it’s about time our government supported seasonal food from our skilled farmers rather than a system that imports and exports the same food products that needlessly criss-cross the globe. I am not suggesting we stop importing products we can’t produce such as coffee, avocados and bananas, but we must pay the true costs and pay a fair price. The tangled bureaucracy of getting food imports across the channel after Brexit has already resulted in a log jam of lorries at EU ports. The silver lining may be less imported food! If you hear the clamour of our not being able to feed ourselves with more local production, Simon Fairlie answers this big question in his article, Can Britain Feed Itself?

To take advantage of this rare window of opportunity to tax imports and protect our domestic industries from foreign competition, how about a radical idea that was discussed at COP26 and at the UN Food Summit? The idea is that we broker a new deal where food traded on the international market would be tariff-free only if it was sustainably produced and transported according to strict global standards of food safety, animal welfare and environmental protection. Any produce of a lower standard would have to pay a tariff or be banned altogether. For example, tariffs would accrue on pork injected with the growth promoting drug ractopamine, treated with excessive quantities of antibiotics, born and raised in horrendous animal welfare standards, transported in massive polluting ships, and so would make local high welfare pork cheaper. Let’s have tariffs to support high environmental, food safety and welfare standards, rather than a political tug of war.

A way to get such a pathway to global cooperation has been the passion of John Bunzel who asks us all to join The Simultaneous Policy – shortened to Simpol.

What? Simpol is an international association of citizens who use their votes in a new way to drive their politicians, parties, and eventually governments towards cooperation to solve the most pressing global issues of our time, such as climate change, fair corporate taxation, mass migration and so on.

How? By joining Simpol, citizens in democratic countries give strong voting preference at all future national elections to politicians or parties that have pledged to implement Simpol’s policies simultaneously alongside other governments. So, politicians or parties who sign Simpol’s Pledge enhance their chances of getting our votes, while those that don’t risk losing out to those that do. As democratic governments are driven to sign the Pledge, non-democratic governments will not want to be left out. They need solutions to global problems too.

Who? Members of Parliament from many parties and countries have already signed the Pledge. You can see the list here. But to solve global problems, we need more! So, if you’re a citizen, please sign on to Simpol to drive your MP, Congressman, Senator or party to sign the Pledge. If you’re a politician or party, we invite you to enhance your electoral chances by signing the Pledge now.

? Out of the ashes of a broken system, there is hope

The biggest obstacle to ideas like these is the corporate-designed, so-called ‘free’ trade agreements, and I’m afraid that Biden is no different from Trump when it comes to ensuring that a US/UK trade deal is on America’s terms. Biden, from Delaware, home to one of the largest intensive chicken producers in the US, said to Britain’s former Deputy PM, Nick Clegg, “We are not going to sign anything that the chicken farmers of Delaware don’t like.” If you need a reminder of how broken the American farming system is compared to the rest of the world and how inspirational change is raising from the destruction, listen to this week’s Farm Gate Podcast with Robyn O’Brien, the best-selling author of The Unhealthy Truth who in September 2020 was named in the Forbes Impact 50, in a list of the top impact investors in the USA. Robyn’s TED talks have received over a million views. The discussion centres on Robyn’s new investment fund, RePlant Capital, which is based in the USA and worth $250m. RePlant’s flagship fund, its Soil Fund, is focussed on the transition of US farmland to regenerative agriculture.

? The true cost of organic compared to conventional food

This recent report puts a price tag on the external costs of meat, dairy and plant production in terms of their greenhouse gas emissions, and makes the case for organic farming being more efficient. It shows that if the true costs of food production were reflected in the retail price paid by the consumer, the price gap between conventional and organic food would be considerably less, making organic much more competitive. 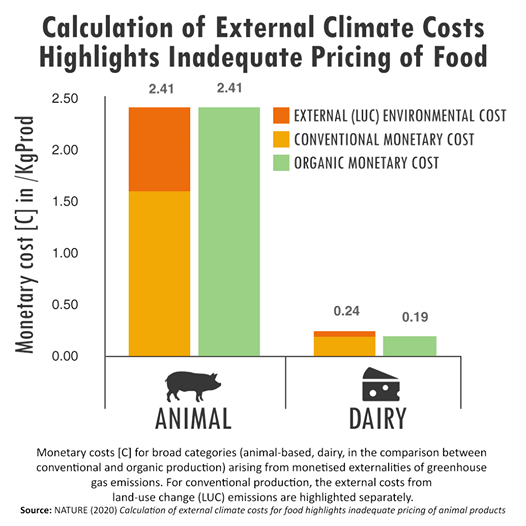 Just as small scale farmers have been bankrupted by excessive health and safety regulations that should only apply to the giant farms and processors, so our small scale abattoirs have also suffered. Despite strong and increasing demand for their services, a further seven have closed during the last year and there are now just 62 left in the UK. This article from the Sustainable Food Trust makes it clear how a network of small scale abattoirs is essential for food resilience, for keeping profits within the locality, and strengthening control and traceability within the supply chain. Butcher and abattoir owner, John Mettrick, talks about how their local abattoir helps the farmers they work with, ‘We provide a service for farmers that adds value to their product. We are able to sell their meat in our shop or send it back to them, which they can then sell at markets or through box schemes.’ This, he explains, generates more income for the farmers than if they were to sell their animals to a livestock market. Thanks to the tireless lobbying of NGOs like the Sustainable Food Trust, abattoirs will be eligible for support under the Agriculture Bill.

This week saw the launch of another brilliant Sustainable Food Trust initiative ‘An Action Plan for Greener Prisons’. It draws on research which indicates that access to the natural world, such as having the opportunity to grow food and work with animals, can improve mental wellbeing and reduce stress, anxiety and depression. Studies also show that active hands-on engagement with nature is effective in supporting marginalised people to reintegrate into society. This is a result of facilitating skills development, which builds self-confidence, provides meaningful activity and develops a deeper sense of responsibility. Within a prison context, horticultural programmes in particular have been proven to offer multiple benefits to prisoners’ wellbeing.

If you don’t already, please support your local high welfare farmers and producers this Christmas by buying your food from them. In our latest #RootingForRealFarms video Tania Beagley Brown says that commercial pigs “aren’t a patch on her traditional rare breed Oxford Sandy and Blacks”. All her pigs are free ranging and pasture fed all year round, topped up with some feed. Is there a farmer like Tanya near you, providing high welfare pork? Check out our high welfare pork directory to find where you can source your food locally. If you know any high welfare pork suppliers/retailers not already in the directory, why not add them today! 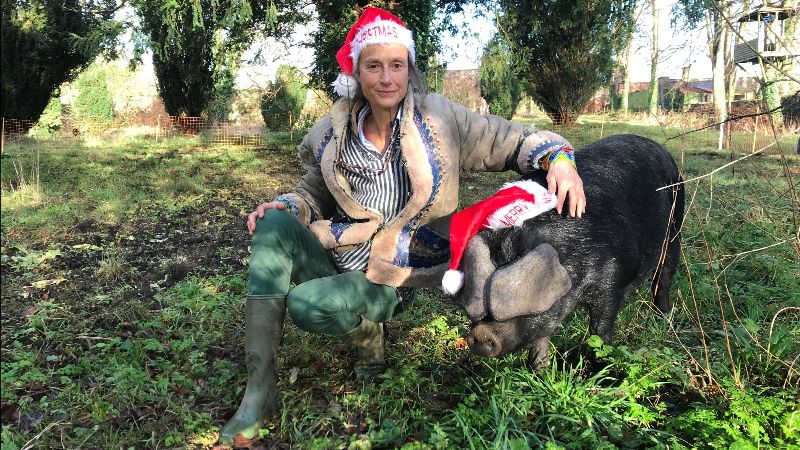 Happy Christmas and New Year and thank you for reading our newsletter.