In China and Argentina, trade officials are planning to turn Argentina into a pork powerhouse to replace some of China’s 300 million pigs killed by, or euthanised to stamp out African Swine Fever (ASF). 55% of surveyed farmers in China have abandoned plans to ever raise pigs again. The plan is to invest £2.7 billion to build 25 factory pig farms in Argentina, each of them cramming 12,500 sows into unhealthy, overcrowded and barren sheds, to supply China’s growing appetite for pork. This would practically double Argentina’s pig production from 9 to 18 million pigs per year requiring thousands of additional hectares of soy and maize for feeding, devastating ever more of their fragile native Gran Chaco forest, the second largest forest in South America after the Amazon. 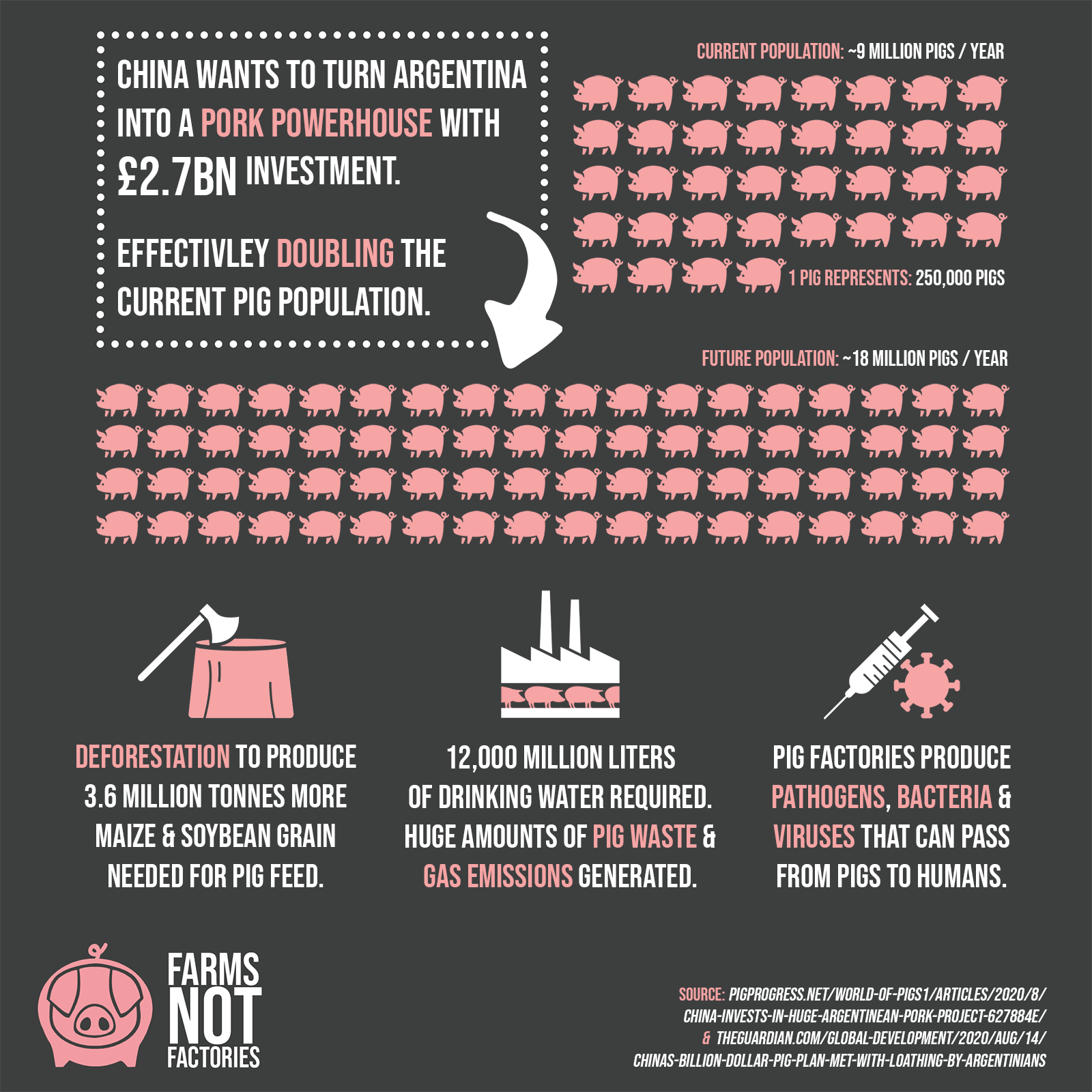 WWF have published a report that supports the UN and WHO in warning that if we fail to protect natural habitats from wildlife exploitation and unsustainable food systems, we increase the probability of new human pandemic diseases. Factory farms themselves are also breeding grounds for human pandemics like the H1N1 Swine Flu virus that first appeared in factory pig farms in North Carolina in the late 1990s before emerging in 2009 as a global pandemic near a Smithfield-owned factory pig farm in Mexico.

So on top of putting pigs in Argentina at an increased risk of an African Swine Fever outbreak, the population there would be ever more exposed to dangerous pathogens, bacteria and viruses that can pass from animals to humans. To add to their nightmare would be the huge increase in pig waste which causes air, water and soil pollution and sickens local residents. Conveniently for China, Argentina does not have a national environmental law and experts believe that the weak regional laws are not up to the task of imposing regulations on giant agri-industrial corporations in a political battleground where gunmen terrorise and kill local environmentalists.

Collusion between the Chinese and Argentine governments to build these massive pig factories is generating unprecedented resistance among the so-called beneficiaries – the Argentine general public. Combined, their petitions have gathered almost 400,000 signatures; please sign and support!

It is not impossible to stop these factory farms getting permission and even closing them once built. One of the episodes in our Farms Not Factories’ country specific film series, #PigBusiness in Chile, recorded the success of the neighbouring residents in their battle with Government police that achieved the closure of the corporate pig factory giant AGROSUPER on safety grounds. It is in all our interests to campaign against the expansion of factory pig farming, not least because this summer, Chinese scientists reported a pervasive new H1N1- G4 virus in China’s vast pig factory operations which contains “all the essential hallmarks” of a virus that can potentially cause a new human pandemic.

Amongst the many pig factories being opposed by local residents across the world, we must include those in the UK that such as Aldoborough, Norfolk where local residents have mounted a campaign against plans to build 2 factory pig farm sheds just outside the village within 250 metres of 26 residential properties that would inevitably be affected by toxic emissions, stench, light pollution and noise. The decision, in spite of a formidable legal challenge, might be made as early as 17 September, and the consultation period has now closed. We will keep you posted on this.

The solution is to buy local food from high welfare farms. This week we interviewed Anthony Davison, creator of BigBarn, the UK’s no.1 local food website. Anthony tells us about the importance of having access to local food networks and thereby finding healthy food at a fair price to both producer and consumer by cutting out the middlemen, not least supermarkets. By using the power of our purse, we can halt the horrors of global trade and help UK farms survive without becoming animal factories.